Durians pack a nutritional punch, but they are fattening
Spiky green fruit with thick and creamy, custard-like flesh is energy-dense, so if you are watching your weight, are diabetic, or simply health-conscious, you may want to avoid going overboard.
Durian are cholesterol-free and full of nutrients, but have a high glycaemic index

Is durian a good source of nutrients?

The facts: it’s durian season, and that means an abundance of the spiky green fruit with the thick and creamy, custard-like flesh. Some people can stop at just one or two seeds, but for diehard durian fans, there is no such thing as enough when it comes to the “king of fruits”.

Unfortunately, durian is an energy-dense fruit, so if you are watching your weight, are diabetic, or simply health-conscious, you may want to avoid going overboard.

Sheena Smith, naturopath and clinical nutritionist with Integrated Medicine Institute says diabetics should not eat durian too often because the fruit can lead to a spike in blood sugar levels and complicate health issues.

“A moderate number would be two seeds a day, tops,” she says. “Of course, durians are addictive, so if you find it hard to limit the amount you eat, then you may wish to abstain from the fruit, especially if you are concerned about weight gain.”

Just one small durian equals about 50 per cent of an adult’s daily calorie requirements. If you are an athlete or require a substantial hit of readily available energy, then eating a few durian segments can certainly help supply the extra calories you need – 100 grams of durian flesh yields about 150 calories.

Contrary to popular belief, durians are cholesterol-free. And, while it is a fattening fruit, it does not contain dangerous saturated fats typically found in red meat and dairy products. 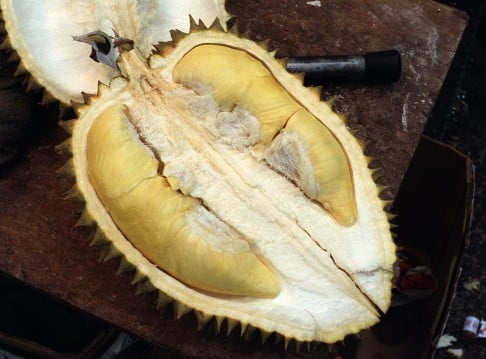 You should avoid eating during if you are running a fever.

In fact, Smith says durians contain high levels of monounsaturated fats, which have been shown to lower your levels of LDL (low-density lipoprotein) cholesterol. Otherwise known as “bad” cholesterol, LDL increases your risk of cardiovascular disease.

In addition, durian contains a number of nutrients, such as potassium, copper, iron, magnesium, folic acid, vitamin C, and B-group vitamins such as niacin, riboflavin and thiamine. It is also an excellent source of dietary fibre, which is good news if you suffer from constipation.

Some people believe that durians should not be eaten while drinking whisky, as the combination can prove lethal. But Smith says there is no scientific evidence or logical physiological reason why this would be true.

However, she adds that durian is a “heaty” fruit, in that it may raise your body temperature. As such, she suggests avoiding it if you are running a fever.

“It’s all about moderation,” she says. “If you’ve been consuming small amounts of the fruit and haven’t noticed any adverse effects, then it should not be a problem to continue eating it in moderation.”

This article appeared in the South China Morning Post print edition as ‘King of fruits’ rich in nutrients, but fattening