Messages from Loved Ones Lost on 9/11

Watch as family members of 9/11 victims share stories of communications from the hereafter and talk about how their lives have changed over the years.

While many of us wonder if there’s life after death, a number of family members of the victims of 9/11 know for certain that there’s an afterlife. Why? Because they’ve received signs, messages and, in some cases, visitations from their loved ones. Watch as they share their inspiring stories of these communications from the hereafter and talk about how life for them has changed over the years.

Bonnie McEneaney, the wife of a 9/11 victim, describes the spiritual experiences she’s had since her husband’s death and the messages she still receives from him today.

Alison Crowther: The mother of a young stock-trader-turned-9/11-hero (Welles Crowther, the 9/11 red bandanna man) shares how she found peace following her son’s death

Monica Iken: A wife reflects on her efforts to properly memorialize the 9/11 victims and the ways in which her late husband still sends her messages. 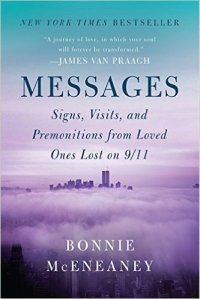