Human resources professionals and academics in Hong Kong claim many fresh graduates are less hard working and more reluctant to face challenges than two decades ago, causing them to be viewed as less valuable.

In one example related by an employer, Lee recalled a management trainee who found visiting construction sites to be such “hard work” that “his parents called the supervisor the next day and filed a complaint.”

The latest government statistics reveal that young university graduates in the city last year earned just HK$1,800, or 20 per cent, more than their predecessors of 20 years ago, lagging way behind inflation and increases in tuition fees and property prices over the same period.

“Even just 10 years ago, fresh graduates would do 120 per cent and outperform, as they believed they could learn from work and wanted to stay competitive,” Lee said. “Now young people only do 80 per cent of their work – they think, ‘how much you pay, how much I work’. My mate once joked that nowadays it’s so easy to get promoted – as long as you do your job right compared to all the lazy people.”

He also noted that mainland students perform better as they value what they earn as well as their working environment, making them more appealing hires. 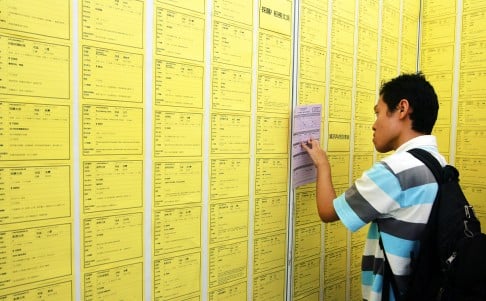 A weak economy has compounded the challenges of finding a decent-paying job. Photo: SCMP

“Youngsters nowadays, compared to the last generation, are less skilful and are reluctant to learn,” he said. “Many employers are disappointed by the young generation.”

Alexa Chow Yee-ping, the managing director of AMAC Human Resources Consultants, said the number of job offers made to university graduates dropped 15 per cent this year. Her clients offer HK$10,000 to HK$12,000 to hire a marketing or administration assistant, while a mobile app programmer is offered more, up to HK$14,000 monthly.

Read more: A university degree in Hong Kong is no longer worth what it once was

“University graduates were real talents two decades ago,” Chow said. “They were the best of the best. If the young generation is less productive, why should they be paid more?”

Nonetheless she believes the sluggish economy is also a reason for the slow gains in young people’s income. “They are not alone. The professionals suffer too.” she added.

“I think they are citing some extreme cases,” he said. “I’m earning HK$11,500 a month It’s not a lot and won’t make me rich, but I’m okay with it. I’m working hard to show my boss that I’m capable and worth more.”