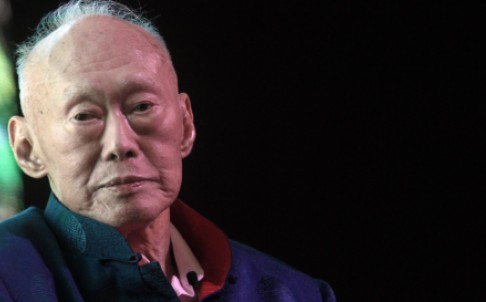 Singapore’s first prime minister Lee Kuan Yew discussed the possibility of euthanasia with his doctors and family in his final years as he struggled with illness and mourned the death of his wife, his daughter revealed today.

In an opinion piece published by The Straits Times today on the 50th anniversary of the city state’s independence, Dr Lee Wei Ling said her father, who was prime minister from 1959 to 1990, found his last few years “sad and difficult”.

“He raised the topic of euthanasia with his doctors, and they told him that was illegal in Singapore,” she wrote in the newspaper.

“I also told him it was illegal for me to help him to do so elsewhere.”

Lee Kuan Yew, whose strict, authoritarian leadership helped turn Singapore into one of the world’s richest nations, died on March 23.

In the last 5 years of his life, he suffered from a range of health complaints including a chest infection, cardiac dysrhythmia and severe pneumonia.

Lee had previously alluded to his desire to die on his own terms in his book One Man’s View of the World, published in 2013, where he wrote he wanted his death to be quick and pain-free.

“There is an end to everything and I want mine to come as quickly and painlessly as possible, not with me incapacitated, half in coma in bed and with a tube going into my nostrils and down to my stomach,” he wrote.

Flinders University’s associate professor Michael Barr, who has studied and published on Singapore, said Lee had been left lost and distraught following the death of his wife, Kwa Geok Choo, in 2010, to whom he had been married for 60 years.

“When she died my first thought was you can’t be 60 years with someone like that and just carry on,” Barr said.

“They were really close … she kept the family together and she really funded his early political career. They go right back to Cambridge [university] days when they were secretly married.”

Barr said towards the end of his life, Lee had trouble with walking. “He’d lost steadiness on his feet, so he started wearing trainers all the time,” he said.

“He changed the gait of his walk so he was walking wider steps to give him balance.”

You have no idea what is it like to lose your spouse of many years unless you have experienced it yourself. Seeing Brenda, my wife of 17 years die in front of me over 23 hours 23 minutes was the hardest test of faith I had to go through in my life.