No grounds to consider crash a terrorist incident, officials say

German Transport Minister Alexander Dobrindt delivers a statement in Berlin. The probe has focused on the co-pilot, after it was revealed the he initiated the fatal descent and refused to open the door to the pilot. Photo: AFP

A young German co-pilot locked himself alone in the cockpit of a Germanwings airliner and flew it into a mountain with what appears to have been the intent to destroy it, a French prosecutor said on Thursday.

Investigators and grieving relatives were left struggling to explain what motivated Andreas Lubitz, 28, to kill all 150 people on board the Airbus A320, including himself, in Wednesday’s crash in the French Alps.

French and German officials said there was no indication the crash was a terrorist attack, but gave no alternative explanation for his motives.

Lubitz gained sole control of the aircraft after the captain left the cockpit. He refused to re-open the door and sent plane into its fatal descent, Marseille prosecutor Brice Robin said.

He did this “for a reason we cannot fathom right now but which looks like intent to destroy this aircraft,” Robin told a news conference in Marseille broadcast live on national TV.

Describing the final 10 minutes of the passengers on board as the plane hurtled towards a mountain range, Robin said sound recordings from one of its black boxes suggested most of them would not have been aware of their fate until the very end.

“Only towards the end do you hear screams,” he said. “And bear in mind that death would have been instantaneous … the aircraft was literally smashed to bits.” 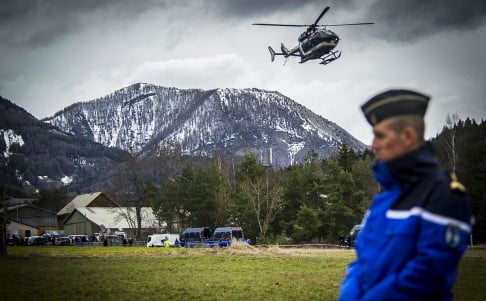 A rescue helicopter sets off to the crash site of the Germanwings Airbus A320 in the southern French Alps. Photo: Xinhua

The CEO of Lufthansa, parent company of Germanwings, said its air crew were picked carefully and subjected to psychological vetting.

“No matter your safety regulations, no matter how high you set the bar, and we have incredibly high standards, there is no way to rule out such an event,” CEO Carsten Spohr said.

The world’s attention will now focus on the motivations of Lubitz, a German national who joined the budget carrier in September 2013 and had just 630 hours of flying time – compared with the 6,000 hours of the flight captain, named in German media only as “Patrick S.” in accordance with usual practice. 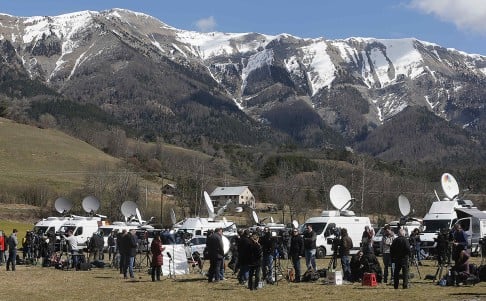 Members of the media present live coverage on a field during a search and rescue operation near to the crash site of an Airbus A320, in Seyne-les-Alpes. Photo: Reuters
Robin said there were no grounds to suspect that Lubitz was carrying out a terrorist attack. “Suicide” was also the wrong word to describe actions which killed so many other people, the prosecutor added: “I don’t necessarily call it suicide when you have responsibility for 100 or so lives.”

Police set up guard outside Lubitz’s house in Montabaur, Germany. Acquaintances in the town said they were stunned, describing him as an affable young man who gave no indication he was harbouring any harmful intent.

“I’m just speechless. I don’t have any explanation for this. Knowing Andreas, this is just inconceivable for me,” said Peter Ruecker, a long-time member of the local flight club where Lubitz received his flying license years ago.

“He was a lot of fun, even though he was perhaps sometimes a bit quiet. He was just another boy like so many others here.”

A photo on Lubitz’s Facebook page, which was later taken down, shows a smiling young man posing in front of San Francisco’s Golden Gate bridge.

Robin said the conversation between the two pilots before the captain left the cockpit started normally but that Lubitz’s replies became “laconic” as they started readying what would have been the normal descent to the airport of Dusseldorf. 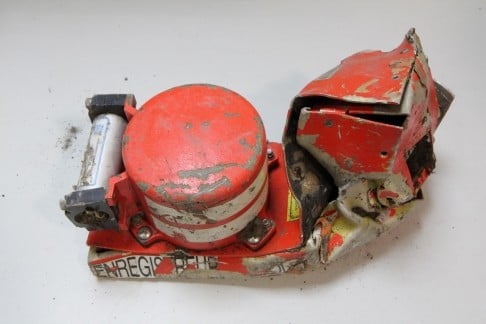 One of the black boxes recovered from the site of the Germanwings crash. Photo: Reuters“

His responses become very brief. There is no proper exchange as such,” he said. It was not clear why the captain had left the cockpit but it was probably to use the toilet, he said.

Robin said the family of the co-pilot had arrived in France for a tribute alongside other those of the victims but was being kept apart from the others.

The New York Times cited an unnamed investigator as saying the recording shed insight into the moment when it dawned on the captain that he had been shut out of the cockpit.

“The guy outside is knocking lightly on the door and there is no answer,” it quoted an investigator described as a senior French military official as saying. “And then he hits the door stronger and no answer. There is never an answer.”

“You can hear he is trying to smash the door down,” the investigator added. 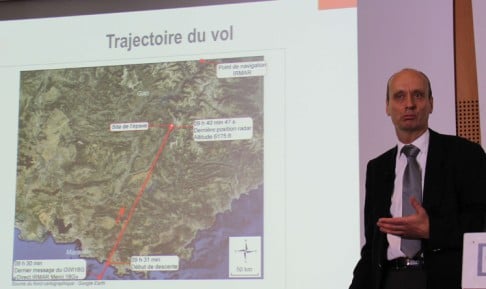 Remi Jouty, general director of the French Bureau of Enquiry and Analysis for Civil Aviation Safety (BEA), shows the plane’s trajectory before the crash. The plane was said to have dropped from 38,000 feet to 6,000 feet within eight minutes. Photo: Xinhua

Investigators were still searching for the second of the two black boxes on Thursday in the ravine where the plane crashed, 100 kilometres from Nice, which would contain data from the plane’s instruments.

France’s BEA air investigation bureau had said on Wednesday it expected the first basic analysis of the voice recordings in days.

Pilots may temporarily leave the cockpit at certain times and in certain circumstances, such as while the aircraft is cruising, according to German aviation law.

Cockpit doors can be opened from the outside with a code, in line with regulations introduced after the September 11, 2001 attacks in the United States, but the code can be overridden from inside the cockpit. Lufthansa’s CEO said that either the pilot had entered the code incorrectly, or the co-pilot inside had overridden it.

The BEA on Wednesday already ruled out a mid-air explosion and said the scenario did not look like a depressurisation. 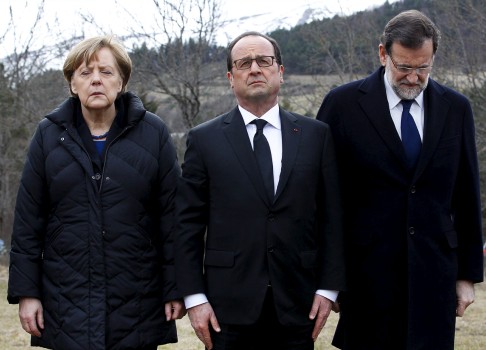 Germanwings said 72 Germans were killed in the first major air passenger disaster on French soil since the 2000 Concorde accident just outside Paris. Madrid revised down on Thursday the number of Spanish victims to 50 from 51 previously.

As well as Germans and Spaniards, victims included three Americans, a Moroccan and citizens of Britain, Argentina, Australia, Belgium, Colombia, Denmark, Israel, Japan, Mexico, Iran and the Netherlands, officials said. However, DNA checks to identify them could take weeks, the French government said.

The families of victims were being flown to Marseille on Thursday before being taken up to the zone close to the crash site. Chapels had been prepared for them with a view of the mountain where their loved ones died. 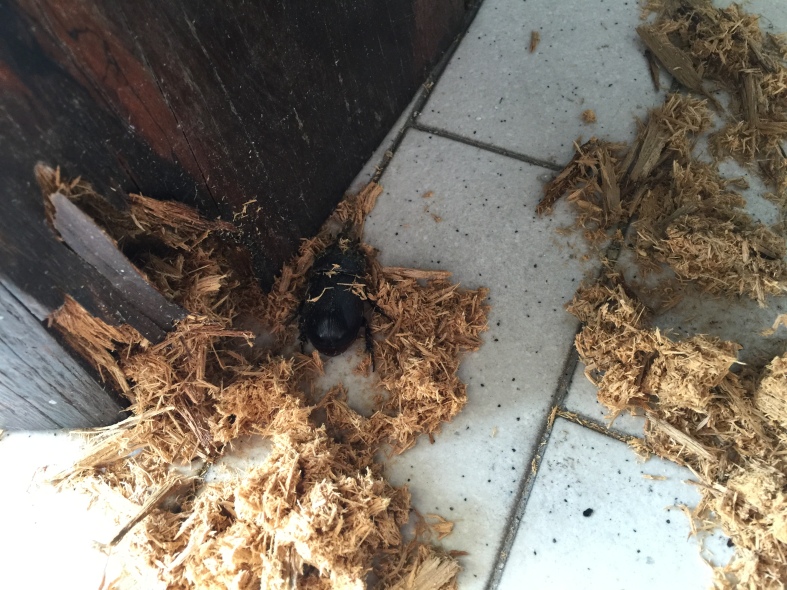 Rhino Beetles are very rare to see in city areas, although they are prevalent in hills like Genting or Cameron Highlands. This is the first time in my life I see a 2 inch Rhino Beetle in my front porch on 14 March 2015. I had initially saw that my teak bench had wood fragments “carved” out 3 days earlier so I sprayed the area with normal cockroach spray. It must had irritated it to come out. I brought it inside and it later died on Tuesday 17 March 2015. Yes, I sometimes unknowingly kill an afterlife sign from Angel Brenda.

On Saturday 14 March 2015, a big 2 inch Rhino Beetle appeared in my front porch. I knew immediately that it was a very important afterlife sign about Pilot’s actions…
10 days later, Germanwings 4U 9525 was deliberately crashed.

The first time a large beetle appeared at my doorstep was 4 days after MH370 disappeared on 12 March 2014. This second large beetle appeared on 14 March 2015 at my porch. This confirms that the same thing happened in MH370 – Captian Zaharie locked the co-pilot out, but with very different intentions. Give me time to write this story about “A Tale of 2 Beetles and the Confirmation that the Pilots of MH370 and Germanwings 4U9525 locked out the other pilot”. I’m too busy clearing work and I need to arrange for my Dad’s memorial this coming Monday. So more later…