Many of the winners chosen in poll of 15,000 Hongkongers are – or were – communal features

The people have voted and, remarkably, among their list of 10 favourite built environments in Hong Kong are several sites that have long been demolished.

Announcing the results of its poll “My 10 most liked Hong Kong architecture of the century” on Friday, the organiser said it had been a close finish. The sites that received the most votes were – in no specific order – the Kowloon Walled City, the Peak Tram, the Star Ferry Piers & Five Flagpoles;  the Kowloon-Canton Railway Terminus & Clock Tower, Lui Seng Chun, Tai O stilt houses, Chi Lin Nunnery, Hong Kong International Airport, the Hong Kong University Main Building and Ocean Park.

The non-profit Hong Kong Architecture Centre organised the vote on 100 sites, shortlisted by its  panel of experts and cultural leaders, as a way to involve the public and promote appreciation of the city’s buildings.

“Architecture provides a legacy to allow future generations to understand historical, social, economical and cultural references of the city,” says architect Corrin Chan Chui-yi, chairwoman of the campaign. “It reflects how people live and also the trends of what people need or want.”

The centre was delighted by the response to its campaign.

It initially expected to get about 4,000 votes, which would have been a pretty good result, Chan said. “But in the end we achieved received 15,000 votes from the public, which is impressive.”

“The final 10 that the public have chosen are really different from our predictions,” she added, noting four out of 10  are transport-related – the airport, the tramway, the railway station, and the Star Ferry pier.

Chan said this showed that architecture is more than just a construction, and “a creation where people interact”.

“Most importantly, these places impact individuals as memories and stories are made. That is an important factor to remember when questioning the popularity of each structure.”

The centre’s public engagement programme continues with a call for stories and experiences from voters about the shortlisted architecture to share and raise awareness of the city’s heritage. Architectural walks, talks and workshops led by local architects and professionals will be held to give the public more information about the historical background of Hong Kong.

Details of the 10 winners

Demolished in 1993, the maze-like enclave was once the world’s most densely populated urban settlement. Originally a Chinese military fort, the walled city was excluded in the 1898 treaty that leased the New Territories to Britain, and for decades operated outside the law.

“This winner was very interesting for me to see.” said Chan. “The walled city disappeared years ago and many have never even been inside. So what made its popularity? It was never designed by architects; therefore it follows the nature of how people live. And that is the effect that it had on Hong Kong people – its historical significance and also it is a natural icon of life that people may be able to relate to.” 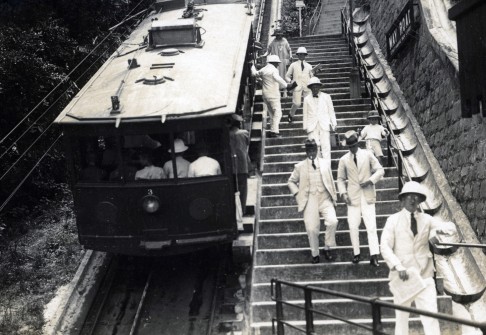 The Peak Tram in the 1930s. It was Hong Kong’s earliest form of public transport.

It may be known as a tourist attraction, but it was the first funicular railway in Asia and Hong Kong’s earliest form of public transport. 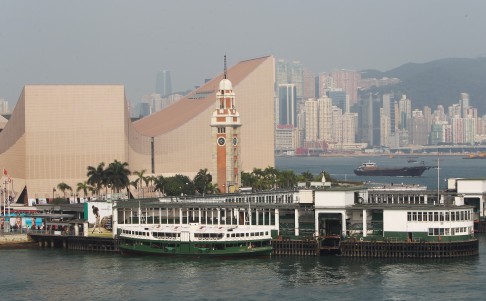 The Star Ferry has long been an icon of Hong Kong, transporting passengers between Tsim Sha Tsui and Central since the 1870s. The current Tsim Sha Tsui pier, the five flagpoles and the old Central pier were built in the late 1950s in the same style. 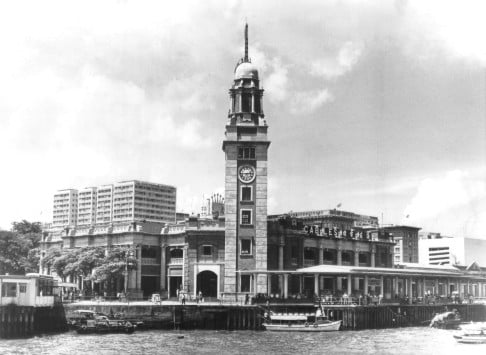 The Kowloon-Canton Railway terminus in Kowloon. All but the clock tower was demolished in 1978.

Built in 1915, it was the terminus of the railway that was built to connect Hong Kong with Guangzhou to secure the then British colony’s status as the port of southern China. The terminus was built in Tsim Sha Tsui to a design by A.B. Hubback, a British architect then working in Malaya. The 44-metre clock tower is the only remnant of the station, which was demolished in 1978. 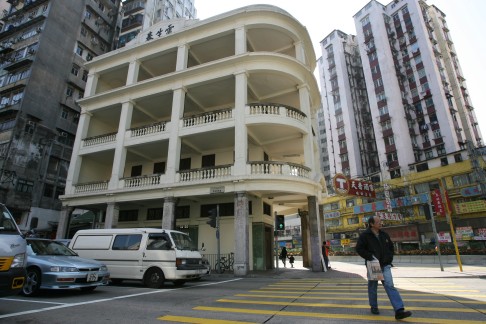 Lui Seng Chun, for which a new use was successfully found.

Designed by architect W. H. Bourne and completed in 1931, the four-storey shophouse in Prince Edward was originally built as a private mansion, with residences on upper floors. Under an urban revitalisation plan, the mansion was converted into a Chinese medicine and healthcare centre run by Baptist University.

Of its transformation, Chan said: “I didn’t think that something so historical would seem alive. It is not a museum, but has been rejuvenated, and now is accessible to the public.” 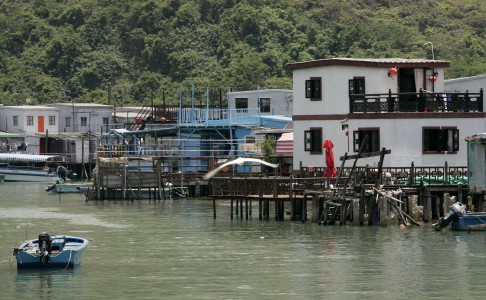 Built by the Tanka fishing community in the Lantau village, the first stilt houses were made from old boats mounted on stilts, with people fishing at the front and living space set at the back. These homes evolved over time into the timber and iron sheet structures that we know today.

Founded in 1934 , the nunnery in Diamond Hill, Kowloon, was rebuilt in the 1990s as a wooden Buddhist temple complex in in the Tang dynasty style, using mortise and tenon joints instead of nails in the construction.

While she expected Chi Lin to make the top 10, Chan said the voting suggests a collective aspiration. “Hong Kong is such a bustling city that when people vote for places like the Chi Lin Nunnery, it suggests a yearning for quiet and peaceful conditions like the nearby Nan Lian Garden.” 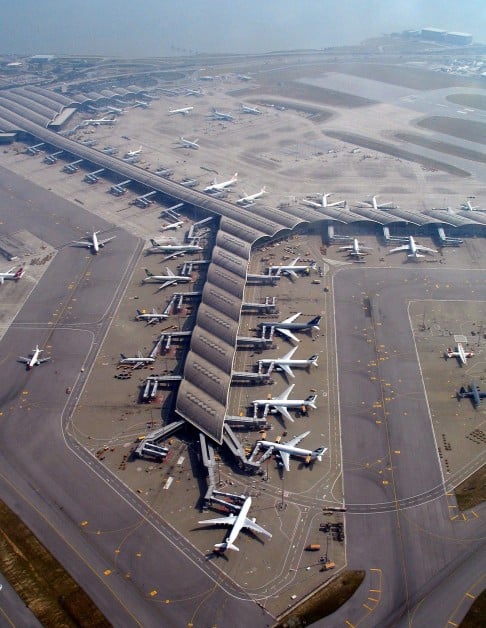 Opened in 1998, Hong Kong International airport replaced the Kai Tak airport.  Designed by Norman Foster as a celebration of the modern age of air travel, it was describd by architecture critic Jonathan Glancey as a “great gothic cathedral in modern material”. 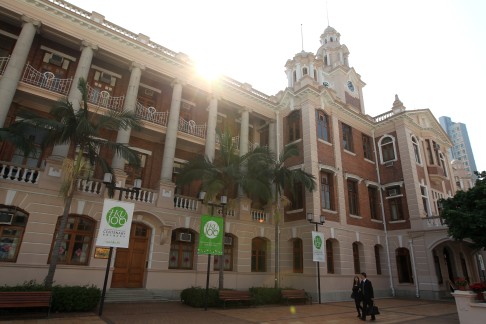 The Main Building at the University of Hong Kong is a typical Edwardian British colonial construction.

Designed by Leigh & Orange  in typical Edwardian style and completed in 1912, the Main Building of the University of Hong Kong was declared a monument in 1984. 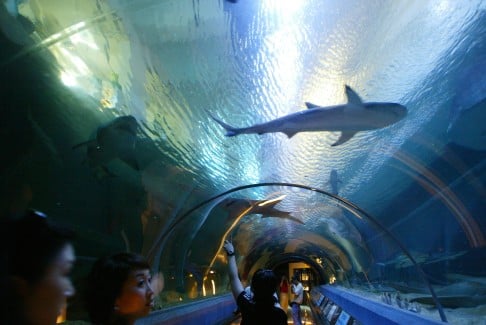 The Shark Aquarium at Ocean Park.

The oceanarium and amusement park in Wong Chuk Hang opened in 1977.

“Ocean park was an interesting result as well,” said Chan. She said she realised from discussions with other architects that unlike other establishments, the park was designed for people’s happiness and wellbeing. “It was the signature of Ocean Park to give visitors an unforgettable experience, which is why people voted for this one.”

An exhibition on the “My 10 Most Liked Hong Kong Architecture” project is being held at Garden Court, Pacific Place, until March 25, and will move to art space Oi!, at 12 Oil Street, North Point, for the whole of April.

One thought on “Revealed: Hongkongers’ top 10 favourite architectural structures in the city”