Zhu Chengshan has spent more than 20 years searching for evidence of killings and led campaign for state memorial day to honour 300,000 who died at hands of Japanese in 1937

Zhu Chengshan, 61, has been curator of the Nanking Massacre Victims’ Memorial Hall – officially known as the Memorial Hall of the Victims in Nanking Massacre by Japanese Invaders – for more than 20 years. He is proud of his job as the person who maintains the memorial to China’s victims. Beijing says 300,000 people died in the six-week massacre by Japanese troops from December 13, 1937. Tokyo points to various estimates, ranging from 20,000 to 200,000. Zhu says that although he may soon retire, he will still devote his time to researching this tragic period of China’s history and also educating the public about what happened. 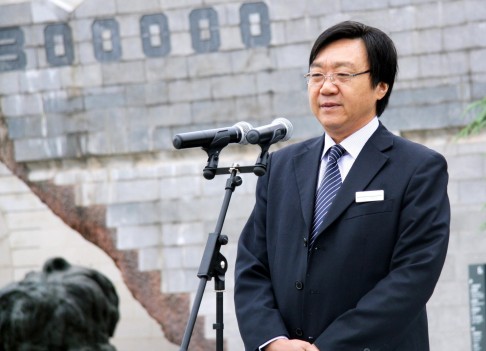 What was the museum like when you started to work there?

I moved from Nanjing’s propaganda department to become the museum’s vice-curator in 1992. The following year I was appointed the curator.

The museum first opened to the public in 1985 to commemorate all the victims killed by Japanese soldiers.

When I first worked there it was one of the city’s smallest museums, covering an area of only 22,000 square metres; its main display hall measured just 800 square metres. There were no more than 100 exhibits and 100,000 visitors came each year.

Now we have 330,000 historic relics on display and last year attracted more than 8 million visitors.

What inspired you to work so hard to promote the museum and teach people about what happened?

Much of the history of the Nanking massacre had been covered up for many years because of various reasons.

The Chinese victims died at the hands of the Japanese military because a weak nation was able to be bullied by a powerful nation. So I wanted to speak out on behalf of all those that died, and remind people of this humiliating period in our history.

I felt it was important that the victims are not forgotten by future generations. Some Japanese politicians have even denied the massacre took place.

I thought we needed to collect and preserve evidence of what really happened before it was too late.

For the past 20 years, I have written books and published articles in newspapers, and also gathered evidence. I carried out research in a large pit where numerous civilians who were killed at the time had been buried. We also held exhibitions both at AT HOME

Gathering evidence has been my biggest endeavour: it is our most important work.

In 1997 we organised 15,000 Chinese university students, and 26 Japanese students as volunteers, to interview all of Nanjing’s residents aged more than 70. From the SURVEY

, we were able to identify 1,200 people who either witnessed the massacre or were victims themselves.

We also collected evidence abroad because some foreigners in Nanjing at the time recorded the slaughter in their diaries, or on film with their cameras.

You were one of the key people pushing for legislation to declare December 13 each year as the national memorial day. How did it come about?

In 1994 I lobbied Nanjing municipal government to set up a memorial day. It followed a business trip I made to Japan in August that year, when I saw Japanese leaders attending state memorial ceremonies in Hiroshima on August 8 and Nagasaki on August 9.

These rituals have been held in Japan since the 1950s and have seen hundreds of thousands of people taking part to mourn those people killed by the two nuclear bombs.

I was shocked because Japan was the invader during the war, yet they still held high-profile ceremonies to mourn their war victims. It made me wonder what China, which was invaded, had done to honour its dead.

I approached local leaders and on December 13, 1994, Nanjing became the first mainland city to hold a memorial for the victims of the massacre. Senior officials addressed a rally at our museum and air raid sirens were heard again across the city.

After six years Shenyang , Changchun and Harbin also began to hold memorials. But I thought the whole nation should be paying tribute, too.

I mentioned my idea 10 years ago to a delegate of the advisory body, the Chinese People’s Political Consultative Conference. Later I asked a National People’s Congress deputy to pass on the proposal to the national legislature.

On February 27 last year I was thrilled to hear that the NPC had approved December 13 as our state memorial day.

Which part in your museum do visitors find most impressive?

Visitors usually pay close attention to a wall covered by photographs of the massacre victims, and 3 places containing the bones of victims.

Another part of our exhibition features a drop of water falling from the ceiling every 12 seconds, just as areas on a wall light up for a moment, to reveal pictures of victims. It encourages people to stand and reflect on what happened.

Every drop of water represents a victim: for six weeks from December 13, 1937, Japanese soldiers killed one of our compatriots every 12 seconds.

Have you met with people who pour scorn on your work?

Yes, quite a few. Some officials have said our culture should not allow people to talk too much about bloody, miserable subjects.

I decided to write an article in the Nanjing Daily to tell people that we should not neglect the strength that can be gained from tragic events. I said that the Nanjing massacre took place at a time when China was backward in areas such as politics, economy and culture, and we should reflect on why we were defeated. We can learn from countries, such as the United States and Germany, which don’t ignore their second world war histories. Some people mock me as being a “massacre specialist”: it’s too bad. I think my work is important.

What did President Xi Jinping say to you when he visited the museum on last year’s memorial day? He asked 68 questions during his 72-minute visit here.

I have received visits from many senior officials from China and other countries, including Xi’s predecessors, but I think Xi is the most professional visitor, and asked more questions than anybody else.

This strengthened my view that the nation’s authorities are paying greater attention to our history and culture.