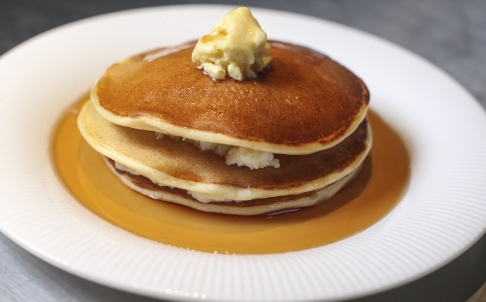 More butter, anyone? US health guidelines put cholesterol back on the menu

Cholesterol, such as that found in butter, may be exempt from the new US health guidelines, but saturated fats are still a concern. Photo: May Tse

A warning against eating foods high in cholesterol is no longer included in the US government’s draft dietary guidelines, upending decades of advice and representing a major shift in policy, officials said Thursday.

Until now, the Dietary Guidelines for Americans recommended that cholesterol intake be limited to 300 milligrams per day – the amount in about one pat of butter, or two small eggs, or a 300 gram steak.

Medical experts used to believe that eating too much cholesterol could raise the risk of heart attack and stroke by contributing to plaque buildup in the arteries.

But the 2015 version of the guidelines will no longer place an upper limit on cholesterol “because available evidence shows no appreciable relationship between consumption of dietary cholesterol and serum cholesterol,” the US Department of Agriculture said in a statement.

The draft report, published online at www.health.gov/dietaryguidelines , said “cholesterol is not a nutrient of concern for overconsumption.”

The guidelines do not become official right away. Instead, they are open for a 45-day comment period and will be discussed at a public meeting in Bethesda, Maryland on March 24.

“We have seen this controversy, especially surrounding the consumption of eggs, which are very high in cholesterol yet filled with beneficial nutrients,” said Suzanne Steinbaum, preventive cardiologist at Lenox Hill Hospital in New York.

The committee “clearly is trying to dispel the idea that cholesterol matters.”

While cholesterol may be getting a free pass, the saturated fat that usually accompanies it is not.

In fact, experts recommend that Americans eat less than before.

Calories from saturated fat should make up about eight percent of a person’s daily calorie intake, compared to the 2010 guidelines that advised 10 percent.

For an average person, eating 2,000 calories per day, the new guidelines would mean the limit of saturated fat could be achieved with a few spoonfuls of butter, or a dozen eggs – since eggs are naturally low in saturated fat – or a 200 gram steak.

“Saturated fat is still a nutrient of concern for overconsumption, particularly for those older than the age of 50 years,” said the report.

“We have known for many years that cholesterol levels are impacted primarily by genetics and high saturated fat intake and not by intake of dietary cholesterol. I am happy to see this evolved position.”

The overarching theme of the draft guidelines was to urge Americans to eat more fruit and vegetables, and Mediterranean and vegetarian diets were recommended as healthy options.

“A diet higher in plant-based foods, such as vegetables, fruits, whole grains, legumes, nuts and seeds, and lower in calories and animal-based foods is more health-promoting and is associated with less environmental impact than is the current US diet,” the report said.

“The inclusion of sustainability criteria in the Dietary Guidelines’ recommendations is a huge step forward for human and planetary health,” said Kari Hamerschlag, senior program manager at Friends of the Earth.

“By recommending consumption of more plant foods and less meat, these guidelines will encourage people to lessen the huge impact of our diets on our natural resources.”