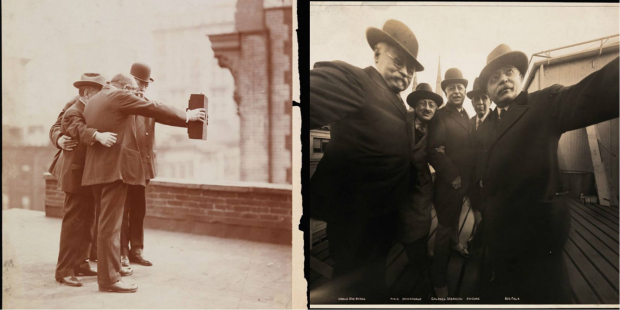 Rare photos never seen before of iconic people and events i.e. the 1st ever selfie in 1920, the iceberg that sank Titanic, the last commercial sailing ship in 1949, and a hippie looking Bill Clinton. Enjoy!

Things that happened a while ago that someone caught on camera

The Royal Navy on the way home from France with Queen Victoria on board, who had just visited Napoleon III, 1858

Climbers bringing down corpses of their fellows from Mont Blanc, 1895

Gold diggers marching through Chilkoot pass, the only way towards Dawson City, 1898

Iceberg that had red and black paint on it. They believe that this is the iceberg that sank the Titanic. Photographed in 1912

Melted and damaged mannequins after a fire at Madam Tussaud’s Wax Museum in London, 1930

A rare color photograph of two Parisian women from 1930

Porsche showing the model of the beetle to Hitler, 1930s

The Olympic flame arrives in Berlin, 1936

Toffs and Toughs – The famous photo by Jimmy Sime that illustrates the class divide in pre-war Britain, 1937

Searchlights on the Rock of Gibraltar, 1942

Georges Blind, a Member of the French Resistance, Smiling at a German Firing Squad, October 1944

A Dutch woman entering military captivity with her husband, a German soldier, 1944

To demonstrate the superiority of the Red Army, 57.000 German prisoners of war are herded through downtown Moscow, July 1944

Liberty bridge in Budapest made temporarily usable after the siege, 1945

Japanese guards bow before US prisoners of war being released from a Yokohama detention center following the capitulation of Japan, 1945

The last commercial sailing ship, Pamir, to round Cape Horn in 1949

James Dean posing in the coffin in the local undertaker in his home town in the year of his car crash and ensuing death, January 1955

Iranian woman before the Islamic Revolution, 1960

Residents of West Berlin show children to their grandparents who reside on the Eastern side, 1961

Frank Sinatra stepping off of a helicopter with a drink in his hand, by Yul Brynner, 1964

Counter-protester with her daughters at a civil liberties rally by black people, Bogalusa, Louisiana, 1965

Detective in disguise in Brooklyn, 1969

Rien ne vas plus in the Dunes Hotel in Las Vegas while Man is landing on the Moon, 1969

One of the two Riace Bronzes discovered by an amateur scuba diver is brought out of the Ionian sea. Calabria, Italy. August 1972

Pelé taking a break on the field of Hungarian football club MTK while filming “Escape to Victory”, 1980

Following a jump worth a gold medal, pole vaulter Wladyslaw Kozakiewicz sends a message to Soviet supporters who had given him the raspberry. Moscow Olympics, 1980

British soldier observing Argentinean helmets after the Battle of Goose Green on the Falkland Islands, May 1982

Camels and burning Kuwaiti oil fields that had been blown up by retreating Iraqi troops, 1991. Photo by Steve McCurry/National Geographic