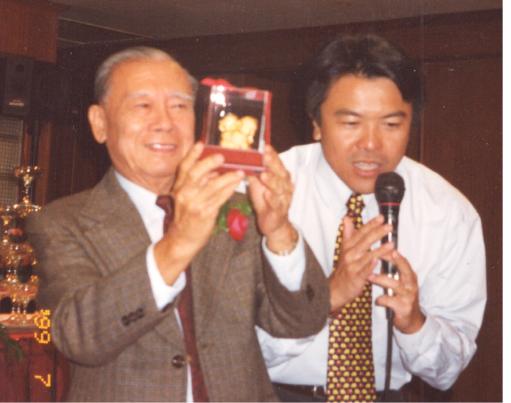 My Dad and I at my Mum & Dad’s Golden Jubilee 50th Wedding Anniversary in 2004. He is admiring a doll baby couple wearing Chinese attire in gold.

My Mum, 2 brothers Andrew and Jimmy was with him most of the day. The day before on Tuesday 17 February 2015, Andrew reported that Dad didn’t look good and was drifting in and out of consciousness. It didn’t look like he would last the day. Tommy my eldest brother immediately tried to book a flight but all flights were fully booked for 2 days and a few days after Chinese New Year. He was on waiting list.

I, on the other hand, didn’t feel the strong need to go. My ChangeU staff and ChangeU Coaches urged me to drop everything and go and they pledged to take care of the “fortress” in Malaysia. I also ran by my guardian angel Brenda and it felt like it’s not meant for me to visit him, or be there with him at the moment of crossing-over.

2 Fly Afterlife Signs over 90 days interval
On 18 November 2014 on the SAME DAY my father checked out after spending 19 days in Lai Chi Kok Hospital, Hong Kong, a fly sat on my hand for a Guinness World Record of 21 minutes (click video link).

On Monday 16 February  2015, a 2nd fly hoovered around me and my staff who was editing the fly video. Its presence was an unmistakable afterlife sign. No flies ever appeared for 90 days since the 1st time.

I was wearing the SAME yellow collared t-shirt and same brown pants (see pic above). I had received news that Dad was getting very weak. I debated on length with my team and in my mind whether it was a good sign or a bad sign. As I interpreted it to be a good sign that he may live longer, I decided not to go and visit my dad in Hong Kong.

3 days later and 93 days after the 1st fly afterlife sign, my Dad crossed-over. Connecting the dots now, the message became clear that Dad will NOT make it pass his 94th birthday on 21 June 2015. Anyways, I felt I was not meant to see Dad as I visited him already in December 2014 and whatever I wanted to say to Dad were said in the last 24 years. We were connected.

The other reason why I didn’t go was I knew my guardian angel Brenda will be with Dad in the crossing-over as she plays an angelic Soul Whisperer role, whereas I play an earthly Soul Whisperer role. Brenda also helped our only Godson, Todd Man to cross over on 20 December 2015.

Why I didn’t want to Pre Soul Whisper to Dad to cross-over
The truth is I was very reluctant to play the earthly Soul Whisperer role as it would mean that soon after the soul will definitely cross-over like how I pre soul whispered to my Granny and she left 38 days later (pre means before crossing-over). I wanted Dad to live 4 months longer until his 94th birthday perhaps. What I wanted as human being and son was not meant to be in destiny and Karma.

On the day of crossing over, Andrew gave us some good news at 5:35pm. Dad was brighter, better, and chatty. He was quite demanding, stroppy, and wanted to go home to celebrate Chinese New Year Eve. The doctor advised against going home as he was still very weak and would need a lot of physical support.

Dad held Mum’s hand tightly and wouldn’t let go
When my Mum said that she was leaving, my Dad held her hand tightly and would not let go of her hand for a long time. This was unusual as prior to this, Dad would complain and would not let Mum touch him as Mum’s hands were rather cold in Hong Kong’s winter. Mum wanted to stay and even keep vigil the whole night but it was Chinese New Year’s eve.

Heavy heart feeling
They left and had Chinese New Year’s eve reunion dinner. That evening Mum felt very uneasy. I can relate to that. On the night before Brenda crossed-over after I’ve left the hospital I felt a great unease. I shared with Andrew that I felt real weird and for him not to leave me alone and to play some soothing jazz music. I thought I was going into depression but it was a different “heavy heart” feeling.

The dreaded call from hospital
Then the hospital called and said he had difficulty breathing and showed signs of crossing-over. Nurses have seen it all and so they are quite good in estimating that the time is near. They rushed to the hospital around 9:30pm which is only 5 minutes by taxi away.

Post Soul Whisper Prayer
Dad was unconscious. They said their goodbyes. The doctor announced the time of death at 12:03am. So Dad made it to Chinese New Year. Andrew skyped me and I said a simple post Soul Whisperer Prayer to Dad (post meaning after crossing over).

Now we wait for the cremation and the waiting queue is 3-4 weeks. A funeral memorial service at the Church of St. Michael, Ipoh will be held after the ashes are brought back to Ipoh.