Shocked survivors climb out of the wreckage of the plane after it crashed in Taiwan’s Keelung River. Photo: Screengrab
Watch close shot of crash…. http://www.mirror.co.uk/news/world-news/taiwan-transasia-plane-crash-watch-5101836

Rescuers continued to search for the missing people from the TransAsia Airways flight that clipped a bridge shortly after take-off and crashed into a river in Taipei yesterday morning, killing at least 31 people.

Using a massive crane, rescuers had last night pulled the three pieces of Flight GE235 from the Keelung River, Taiwan’s Central News Agency reported. The fuselage and tail were brought to shore a little after 8pm, and the nose was lifted just after midnight, according to Taipei City Fire Department officials. The bodies of the pilot, co-pilot and a crew member were found in the water shortly later and two other passengers were discovered half a kilometre away in the river.

Twelve people remained missing and 15 survivors were being treated in hospital.

A total of 53 passengers, including four children, and five crew members were on board the ATR 72-600 propeller aircraft when it departed Taipei’s Songshan Airport at 10.52am bound for Quemoy.

The ATR 72-600 propeller aircraft crashed at 10.56am in Taipei, shortly after it took off from the city’s Songshan airport, which serves domestic flights. A statement from TransAsia on Wednesday afternoon said 28 people were known to be injured and were being treated in local hospitals. They include nine people who had suffered severe injuries, the statement said.

That leaves at least 17 people unaccounted for. An earlier news release by the Taipei government had said 30 people were missing and 2 passengers travelling in a taxi hit by the plane as its left wing clipped the highway bridge were also injured.

A total of 53 passengers – including four children – and five crew members were on board the plane when it hit an elevated road near the Nangang district in Taipei before crashing into the water, TransAsia said.

31 of the passengers were mainland Chinese tourists. Many were from the city of Xiamen.

Watch: The moment a TransAsia plane hits bridge and crashes in Taiwan

The TransAsia statement said the aircraft, a new-model twin-engine turboprop regional airliner made by the French-Italian aircraft manufacturer ATR, was only delivered to the airline in April 2014 and had been in service for less than a year. The latest scheduled maintenance for the plane was completed on January 26, it said.

It was the second TransAsia aircraft to crash in the past year.

48 people died after one of the carrier’s ATR-72 planes crashed last July on the island of Penghu off the coast of Taiwan.

Television news footage on Wednesday morning showed the aircraft half-submerged in the Keelung River, its fuselage crumpled and tail broken.

A tweet sent out by a Taiwanese Twitter user purportedly showed the dramatic moment, captured by the dashboard camera of an oncoming car, when the plane hit the highway bridge.

The photo sequence shows the aircraft losing control and tilting fully to its side, its left wing breaking as it hits the bridge then plummeting into the shallow river.

The aircraft’s wing appears to strike the roof of a taxi travelling on the road.

The plane was bound for Kinmen, a Taiwanese defence outpost just off Xiamen in southeastern China, aviation officials said. 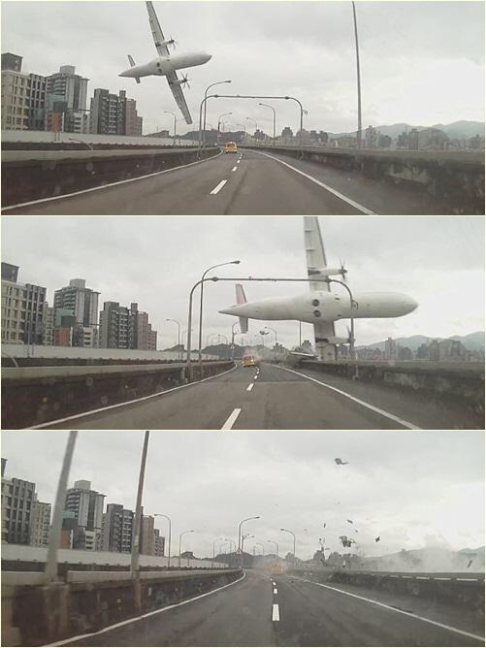 Some passengers, dazed and shell-shocked, managed to climb out of the wreckage.

A witness told ETTV that more than a dozen survivors were standing in the cold river, waiting for rescue.

Search and rescue teams have arrived at the scene, carrying inflatable life rafts.

One official said the missing are feared to be in the front section of the aircraft, which rescuers are cutting into to gain access.

“The front part of the plane crashed straight into the river and the missing could be trapped there,” said Wu Chun-hung, acting director of the Taipei Fire Department.

Watch: At least 13 killed after TransAsia plane crashes in Taiwan

The Defence Ministry said 300 soldiers were helping with the rescue and helicopters were searching for any survivors who might have drifted along the river.

The director of Taiwan’s Civil Aeronautics Administration, Lin Chih-ming, said it was still investigating the cause of the crash.

The aircraft’s flight recorder has been recovered from the scene.

Flying Travel Service, based in southern Taiwan, said it had helped arranged the tour of 16 travellers from Xiamen who were due to be on the aircraft.

“They were supposed to take the flight from Taipei to Kinmen today where they would have boarded a vessel back to Xiamen,” an official at the travel company said.

The 31 visitors from mainland China had booked through two travel agencies in Xiamen and most were from that area, the Xiamen Daily newspaper said.

A 10-year-old is the youngest of the mainland passengers thought to be on board.

The pilots had lost their bearings while flying in a typhoon en route to the islands of Penghu from Kaohsiung on July 23. The plane crashed in the village of Xixi, about 1 km northeast of the airport.

TransAsia is based in Taipei and the airline was formed in 1951.

It operates about 20 aircraft serving routes in Asia.