The co-pilot of AirAsia flight QZ8501, Remi Emmanuel Plesel, was at the controls when the crash happened, according to sources close to the investigation. Photo: AFP

The captain of the AirAsia jet that crashed into the sea in December was out of his seat conducting an unorthodox procedure when his co-pilot apparently lost control.

And by the time he returned it was too late to save the plane, two people familiar with the investigation said.

It was unclear what “unorthodox procedure” he was performing, but experts have said the captain may have decided to cut off a key computer system on the airplane, which would require the pilots looking to reset it to press a button on the overhead panel.

To pull the circuit breaker, the captain had to rise from his seat, the experts said.

Details emerging of the final moments of Flight QZ8501 are likely to focus attention partly on maintenance, procedures and training, though Indonesian officials have stressed publicly that it is too early to draw any firm conclusions.

The Airbus A320 jet plunged into the Java Sea while en route from Surabaya, Indonesia, to Singapore on December 28, killing all 162 people on board.

It had been suffering maintenance faults with a key flight control computer for over a week, and one person familiar with the matter said the captain had flown on the same plane with the intermittently faulty device just days before the crash.

AirAsia said it would not comment while the matter was under investigation by the National Transportation Safety Committee (NTSC) of Indonesia. 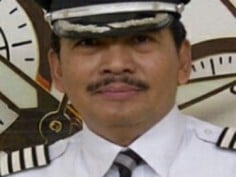 Captain Iriyanto, the more experienced of the two, was performing an ‘unorthodox operation’ before the crash, sources say.

Maintenance problems on the Flight Augmentation Computer (FAC), and the way the pilots reacted to them, were at the heart of the investigation, Reuters reported.

After trying to reset this device, pilots pulled a circuit-breaker to cut its power, Bloomberg News reported yesterday.

People familiar with the matter told Reuters it was the Indonesian captain Iriyanto who took this step, rather than his less experienced French co-pilot Remy Plesel, who was flying the airplane.

The outage would not directly upset the aircraft but would remove flight envelope protection, which prevents a pilot from taking a plane beyond its safety limits, leaving the junior pilot to fly the jet manually in delicate high altitude conditions.

The circuit breakers are on a wall panel immediately behind the co-pilot and hard or impossible to reach from the seated position on the left side, where the captain sits, according to two experienced pilots and published diagrams of the cockpit.

“You can reset the FAC, but to cut all power to it is very unusual,” said one A320 pilot, who declined to be identified. “You don’t pull the circuit breaker unless it was an absolute emergency. I don’t know if there was one in this case, but it is very unusual.”

Shortly afterwards the junior pilot pulled the plane into a sharp climb from which investigators have said it stalled or lost lift.

“It appears he was surprised or startled by this,” said a person familiar with the investigation, referring to the decision to cut power to the affected computer. 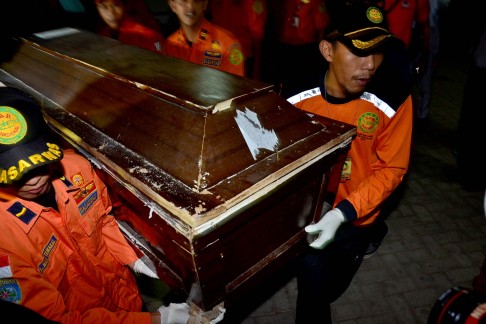 Members of an Indonesian rescue team carry a coffin with the remains of a victim of the AirAsia flight QZ8501 which was recovered last night. All 162 people onboard died. Photo: AFP

The captain eventually resumed control, but a person familiar with the matter said he was not in a position to intervene immediately to recover the aircraft from its upset.

Data already published on the plane’s trajectory suggest it may have been difficult for someone to move around the cockpit in an upward-tilting and by then possibly unstable aircraft, but there is so far no confirmation of the cockpit movements.

“The co-pilot pulled the plane up, and by the time the captain regained the controls it was too late,” one of the people familiar with the investigation said.

Tatang Kurniadi, chief of Indonesia’s NTSC, told Reuters there had been no delay in the captain resuming control but declined further comment.

Lawyers for the family of the French co-pilot say they have filed a lawsuit against AirAsia in Paris for “endangering the lives of others” by flying the route without official authorisation on that day. Investigators have said the accident was not related to the permit issue.

AirAsia did not immediately respond to requests for comment on the lawsuit.

Although more is becoming known about the chain of events, people familiar with the investigation warned against making assumptions on the accident’s cause, which needed more analysis.

Safety experts say air crashes are most often caused by a chain of events, each of which is necessary but not sufficient to explain the underlying causes of the accident.