An eye-catching stunt to pilot a drone over 10 kilometres of stunning Hong Kong countryside in order to deliver a chocolate bar to a friend took months of careful planning, one of the project’s pilots has revealed.

Tens of thousands of viewers have watched a spectacular two-minute YouTube video of the flight mission, from Tseung Kwan O to Repulse Bay, believed to be the first drone delivery in Hong Kong.

But it wasn’t simply a case of up, up and away. The team of pilots had to carefully plot out their route, taking into account obstacles such as air traffic, skyscrapers and no-fly zones.

The success of the stunt gives an intriguing look at the uses and capabilities of smaller drones, according to pilot “Sky Frog”, who said he wished to remain anonymous for fear of repercussions over the flying escapades in a legally grey area.

Shopping giant Amazon revealed last year that it had been looking at the possibility of one day using drones to deliver goods to customers’ doorsteps. A Greek businessman has also developed a line of drones that could deliver medicines to disaster-stricken areas.

Frog said he and his drone hobbyist friends had dreamed up the stunt after conducting aerial filming of Hong Kong’s green areas using a “consumer-level quadcopter easily available online” and realising that it was theoretically capable of a long-distance mission. 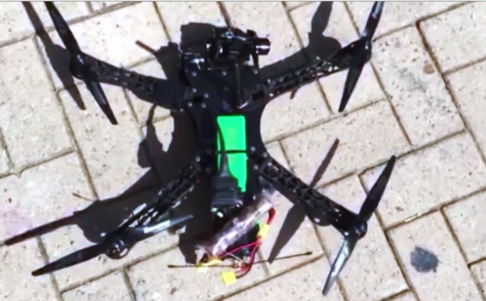 The bar of chocolate was attached to the front of the drone, which had to deliver it across 10 kilometres. Photo: Screengrab from YouTube
The route was chosen as it “offers the best scenery”, said Frog, a Hongkonger who said he has been flying recreational drones for two years, notching up 1,000 hours of flight time.

The team had to modify their quadcopter to boost the battery life and spent weeks scouting remote areas of Hong Kong, researching wind speeds, air traffic patterns and the possible interference of obstacles along the way, while minimising the number of roads on the flight path for safety reasons.

On January 19, a clear day with blue skies, the team set off to make their delivery – transporting a 43-gram Kinder Bueno chocolate bar 9.8 kilometres to a friend waiting at Repulse Bay. 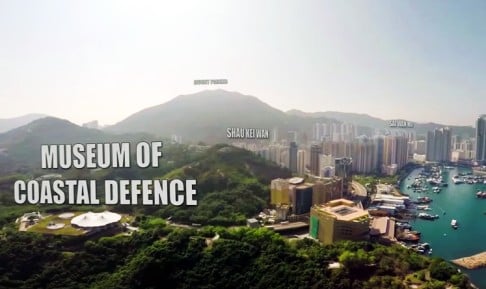 The drone crosses the bay over to Shau Kei Wan. Flying over water is safest, says the pilot, as there is no one underneath. Photo: Screengrab

A relay team of 7 pilots were positioned at various points along the route, each taking control of the drone as it came into range, flying at a height of around 100 metres – well away from any air traffic.

The YouTube footage, which has been sped up to condense the 13-minute, 33-second journey into a 2-minute film, sees the drone speed over forests and hillsides, taking in the curve of glittering water hugging the coast of Lei Yue Mun.

As the drone hovered near the Museum of Coastal Defence, the pilot turned the camera around to take in the panoramic view before the drone’s journey continued, skirting Mount Parker and a cluster of towers in Chai Wan before passing Tai Tam Tuk Reservoir and finally arriving at Repulse Bay where the final pilot tucked into the Kinder bar.

“It melted a little bit. But the person at the very end ate it and said it still tasted pretty good,” Frog said. “So it worked!” 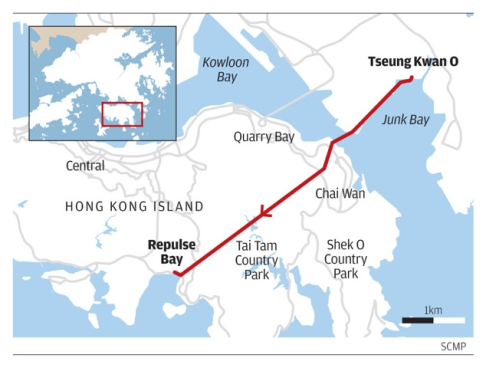 The drone’s flight path.
He added that the exercise was a lesson on how to fly drones safely and stressed the importance of careful planning. Some novice fliers, he said, were taking risks near to buildings or flying over crowds in order to post their Hong Kong flight videos online.

“Drone technology is progressing so fast that if we hadn’t done this delivery stunt, someone else would have – but someone with less experience.

“We wanted to raise awareness about the preparation required for a safe flight,” Frog said.

“There are a few moments when we fly over roads. That was a calculated risk, we crossed at a high speed perpendicular to the road.”

Drones typically have 12 to 15 minutes of battery time, but more powerful DJI Phantom models have a battery life of 20 minutes. “If you tinker a bit, you can achieve up to 25 minutes,” Frog said. 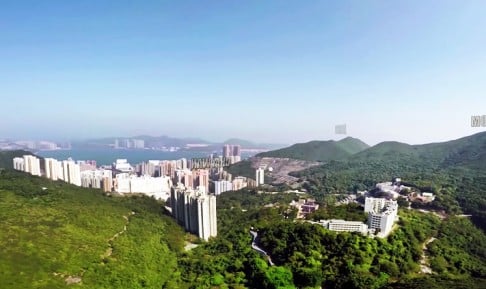 Several times during the journey, the drone camera focuses on where it had just travelled, taking in views of the skyline and harbour. Here, it has just passed Chai Wan.
Drones such as the model used by Frog’s team, which weighs in at under 7kg without fuel, can be flown for “recreational purposes”, with out a permit from the Civil Aviation Department. However, rules stipulate that they must not fly within 50 metres of a person or structure, and must not pass within five kilometres of an aerodrome.

Despite their success, Frog was cynical that drones would be delivering parcels in Hong Kong anytime soon.

“Anywhere you go, it’s way too crowded and dangerous. There would have to be specific landing sites,” he said. “If you live in the countryside, like the people living in the New Territories, for those people drone delivery would be more useful.”

Frog says off-the-shelf drones can carry between 300 to 500 grams of payload, while some modified drones can carry up to 3.5kg. Drone models available in Hong Kong cost from a few thousand to tens of thousands of dollars. 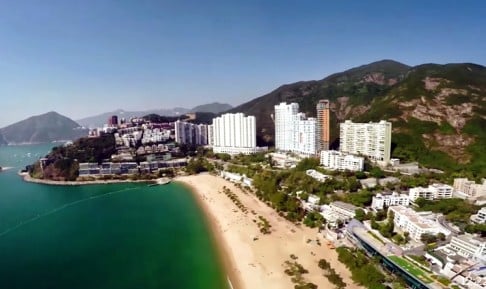 The drone coasts to its landing point in Repulse Bay, where the last pilot received – and ate – the chocolate.

Brenda’s ossuary is directly to the left of the tall white building (below the Pottinger Peak caption) – on the hillside.

The drone panoramic view of familiar Hong Kong places were stunning. When it had a Hawk’s eye view of the Chai Wan Catholic Cementery I choked as it had a view of Brenda’s ossuary on the hillside of Chai Wan.
A few seconds earlier in the video the drone flew pass Mount Parker where I lived in the famous “ghost” colonial style house Mount Parker Woodside.

Although I have a 7th Sense to connect with the Spirit World, I do not possess the gift of “seeing” ghosts or angels as an apparition. Some psychics can “see” but not me. I sense through thoughts, feelings, intellectually, and telepathy (communication of thoughts beyond the the 5 senses).