From paraplegics able to stand, to stroke victims walking again, robotic exoskeletons which wrap around the body could transform movement

The Guardian in Las Vegas

Emily Blunt and Tom Cruise in “Edge of Tomorrow”

Visions of humans running in exoskeletons able to move faster, jump higher and hit harder from films like Tom Cruise’s Edge of Tomorrow are no longer science fiction but a reality.

What started out as a military tool helping soldiers carry large loads has spawned applications in medicine, rehabilitation, construction and in the near future, possibly even sports.

“We see the world of robotics as having a giant wave of human augmentation coming right at it,” said Nate Harding, chief executive and co-founder of Ekso Bionics at CES in Las Vegas. “People will be running faster, jumping further and grannies will be showing off their new hip exoskeleton.”

Harding was speaking at a conference discussing the future of robotics and brought with him a working exoskeleton that allowed paraplegic 22-year-old Shane Mosko from Connecticut, to stand up and walk, stunning the audience.

“It’s about wrapping a robot around a person,” explained Harding. “In the case of Shane, he’s able to get up and walk without assistance. We know it will have a very positive affect on the long term health of people who are stuck in wheel chairs.”

The exoskeleton ran down Mosko’s legs to feet plates, powered by a small backpack and controlled partially through two walking sticks used to aid balance.

“I’ve been using this device for about two years, and it didn’t take long to get to where I can walk,” explained Mosko while walking backwards and forwards across the stage.

“I’m paralysed and I’m not supposed to be up and walking, but being at eye level with you all. With this device it’s a possibility.

“With this device I can really work on building strength where I have it. I can basically walk as long as the batteries will allow, which is not possible with some of the other fixed knee solutions. This is only the beginning and there’s so much further we can go. ” 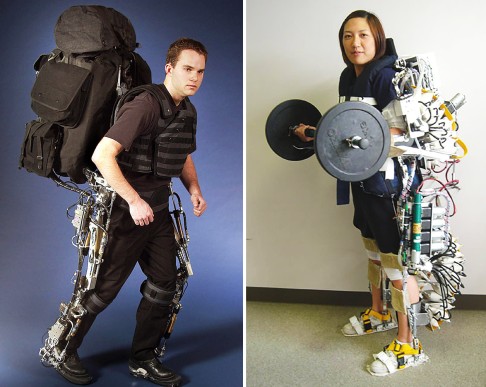 The exoskeleton has been designed to help paraplegics gain mobility, but also to help stroke victims learn how to walk again. It is controlled by buttons on a set of walking sticks, but also with the weight of the wearer.

Leaning forward in natural walking stances, while rocking side to side, triggers the steps in a very human-like non-robotic way.

The exoskeleton detects how much power a person is putting in and fills the shortfall to maintain stability, but also to help people build their strength where they have it.

“Our technology started in the military, carrying heavy loads and with our partners Lockheed Martin we’re still doing that. But we melded technologies from people for athletics and people with paralysis to aid people with stroke to walk again,” said Harding.

“Now we’re looking at industrial applications – for construction crews holding heavy tools or working on overhead surfaces. In five years you’ll see exoskeletons on the building site and on the medical side, someone with paralysis will be using one to get around a party.”

Ekso Bionics is not the first firm to help a paraplegic person walk in a mechanical exoskeleton. The ReWalk device, made by Argo Medical Technologies, has been available in Europe since 2012. In June, it was cleared for sale by US regulators.

ReWalk weighs 21kg, only 2.3kg of which users feel in the form of a backpack containing a computer and power supply, according to Argo, based in Marlborough, Massachusetts.

The personal system costs US$69,500 each according to retailers.