An Indonesian search and rescue official said today that none of the bodies recovered so far from the crashed AirAsia jet had been wearing a life jacket.

“There is no victim that has been found wearing a life jacket,” said Tatang Zaenudin, deputy head of operations at the national search and rescue agency.

The same official said earlier that one of the recovered bodies had been wearing a life jacket, prompting speculations that those on board had at least some time before the aircraft hit the water, or after it hit the water and before it sank.

The pilots did not issue a distress signal before the plane disappeared. The flight had failed to get permission to fly higher to avoid bad weather because of heavy air traffic.

Rescuers believe they have found the plane on the ocean floor off Borneo, after sonar detected a large, dark object about 30 to 50 metres beneath the water’s surface, near where debris and bodies were found.

But bad weather and strong currents were sending wreckage drifting far from the crash site and hampering search efforts.

National Search and Rescue Agency chief Vice Marshall Bambang Soelistyo said that so far, the fuselage had not been found despite the sonar images indicating a bulky object on the sea floor.

The commander of the Bung Tomo warship which recovered some debris said they lifted 28 items from the water. “There were snacks, instant porridge, and three umbrellas,” Colonel Yayan said in a local TV interview.

“It seems all the wreckage found has drifted more than 50 kilometres from yesterday’s location,” said Vice Air Marshal Sunarbowo Sandi, search and rescue coordinator in Pangkalan Bun on Borneo island, the closest town to the site. “We are expecting those bodies will end up on beaches.” The bodies will be sent for identification at a police hospital in Surabaya. Relatives have sent blood samples for DNA tests. Photo: AFP

Soelistyo also told a press conference that of the total seven bodies – four men and three women – one of them was wearing a flight attendant’s uniform.

Most of the people on board were Indonesians. No survivors have been found.

Authorities in Surabaya, the plane’s take-off point, were making preparations to receive and identify bodies, including arranging 130 ambulances to take victims to a police hospital and collecting DNA from relatives.

”After being cleaned up and prayed for, we will place the bodies into coffins and fly them to Surabaya for identification,” Soelistyo said.

Earlier reports that 40 bodies had been recovered were later put down to a miscommunication by navy staff. An Indonesian search and rescue team carries a dead body on a stretcher in Surabaya, where they will be identified. Photo: AFP 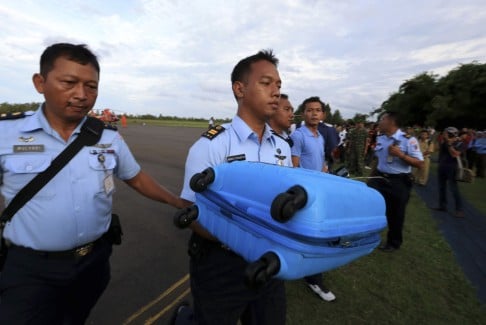 The identification process will be carried out by a disaster victim investigation team of the East Java Police at HS Samsoeri Mertojoso Police Hospital in Surabaya, he added.

About 125 family members had planned to travel to Pangkalan Bun, 160 kilometres from the area where bodies were first spotted, to start identifying their loved ones. However, Surabaya airport general manager Trikora Hardjo later said the trip was cancelled after authorities suggested they stay to avoid slowing down the operation.

Instead, some relatives gave blood for DNA tests in Surabaya, where the bodies will be transported, and submitted photos of their loved ones along with identifying information, such as tattoos or birth marks that could help make the process easier.

Ships and planes had been scouring the Java Sea for Flight QZ8501 since Sunday, when it lost contact during bad weather about 40 minutes into its flight from the Indonesian city of Surabaya to Singapore. 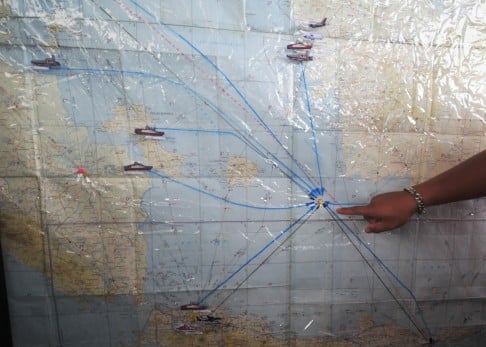 A member of Indonesian search and rescue team shows the possible location of AirAsia flight QZ8501 at Juanda International Airport in Surabaya. Photo: Xinhua“We are praying it is the plane so the evacuation can be done quickly,” Hernanto said.

“As soon as the weather is clear, the bodies will be brought to Pangkalan Bun,” the town with the nearest airstrip to the crash site, said Soelistyo.

Officials said waves two to three metres high and winds were hampering the hunt for wreckage and preventing divers from searching the crash zone.

Indonesia’s meteorology and geophysics agency predicted that the conditions would worsen, with more intense rains, through Friday

Helicopters were largely grounded, but ships were still scouring the area.

Forty-seven frogmen of the navy and 20 others from the National Search and Rescue Agency were to be dispatched by Wednesday to the crash site for search efforts, he said.

Japan said today it is sending two destroyers and three helicopters to aid in the search at Indonesia’s request.

The black box flight data and cockpit voice recorder have yet to be found in the relatively shallow waters of the Java Sea.

Online discussion among pilots has centred on unconfirmed secondary radar data from Malaysia that suggested the aircraft was climbing at a speed of 353 knots, about 100 knots too slow, and that it might have stalled.

“The fact that the debris appears fairly contained suggests the aircraft broke up when it hit the water, rather than in the air,” said Neil Hansford, a former pilot and chairman of consultancy firm Strategic Aviation Solutions. 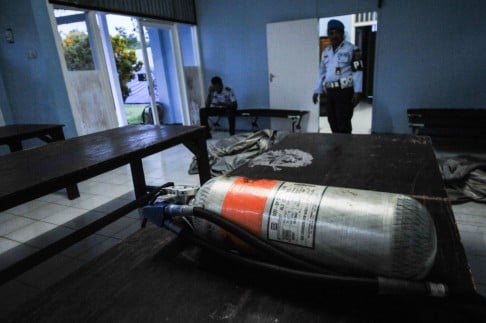 Nearly all the passengers from Indonesia were frequent visitors to Singapore, particularly on holidays.

But it was 13-year-old passenger Adrian Fernando’s first trip to the city-state and was supposed to be a fun vacation with his aunt, uncle and cousin before he went back to school.

“He is my only son,” said mother Linca Gonimasela, 39, who could not join them on the flight because of work. “At first, he didn’t want to go, but later on he was persuaded to join them for the New Year holiday.”

Indonesian President Joko Widodo said his priority was retrieving the bodies. “I feel a deep loss over this disaster and pray for the families to be given fortitude and strength,” Widodo said.

Widodo, speaking in Surabaya on Tuesday after grim images of the scene in the Java Sea were broadcast on television, said AirAsia would pay an immediate advance of money to relatives, many of whom collapsed in grief when they saw the television pictures from the search.

AirAsia Chief Executive Tony Fernandes, who has described the crash as his “worst nightmare”, was rushing to Surabaya where relatives of the missing are gathered at a crisis centre in Indonesia’s second-largest city.

About 30 ships and 21 aircraft from Indonesia, Australia, Malaysia, Singapore, South Korea and the United States have been involved in the search. 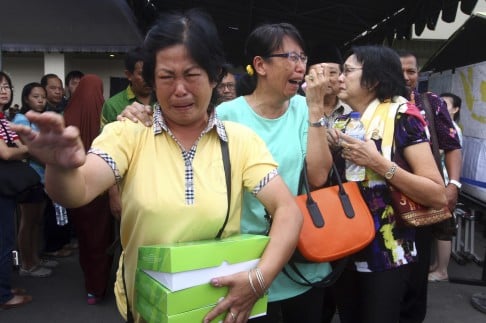 Relatives of passengers of AirAsia Flight 8501 cry after visiting the crisis centre at the airport in Surabaya, where authorities have been keeping them abreast of the latest developments. Photo: AP

Singapore said it was sending two underwater beacon detectors to try to pick up pings from the black boxes, which contain cockpit voice and flight data recorders.

The United States said its missile-guided destroyer USS Sampson and combat ship USS Fort Worth were awaiting instructions from the Indonesian search command on the recovery operation.

Investigators are focusing initially on whether the crew took too long to request permission to climb, or could have ascended on their own initiative earlier, said a source close to the probe, adding that poor weather could have played a part as well.

A Qantas pilot with 25 years of experience flying in the region said the discovery of the debris field relatively close to the last known radar plot of the plane pointed to an aerodynamic stall, most likely due to bad weather. One possibility is that the plane’s instruments iced up in a tropical thunderstorm, giving the pilots inaccurate readings.

The lack of a distress call indicated the pilots may have realised too late they were in trouble and were too busy struggling to control the aircraft to issue a call, the Qantas pilot said.

The Indonesian pilot, a former Air Force jet fighter pilot with 6,100 flying hours under his belt, was experienced and the plane last underwent maintenance in mid-November, said the airline, which is 49 per cent owned by Malaysia-based budget carrier AirAsia. 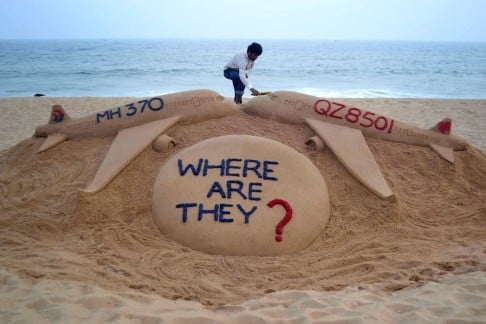 Three airline disasters involving Malaysian-affiliated carriers in less than a year have dented confidence in the country’s aviation industry and spooked travellers across the region.

Malaysian Airlines Flight MH370 went missing in March on a trip from Kuala Lumpur to Beijing with 239 passengers and crew and has not been found. On July 17, the same airline’s Flight MH17 was shot down over Ukraine, killing all 298 people on board.

In an additional incident, an AirAsia plane from Manila overshot the runway on landing at Kalibo in the central Philippines on Tuesday. No one was hurt.

On board Flight QZ8501 were 155 Indonesians, three South Koreans, and one person each from Singapore, Malaysia and Britain. The co-pilot was French.

The AirAsia group, including affiliates in Thailand, the Philippines and India, had not suffered a crash since its Malaysian budget operations began in 2002.

With additional reporting from Associated Press and Agence France-Presse

One thought on “No victim from crashed AirAsia plane was wearing life jacket, Indonesian official said”