Family members of passengers on board AirAsia flight QZ 8501 talk on their phones at an airport crisis centre in Surabaya. Photo: Reuters

A massive sea search resumed this morning for an AirAsia passenger jet that disappeared with 162 on board while flying from Indonesia to Singapore through airspace thick with storm clouds, strong winds and lightning.

First Admiral Sigit Setiayana, the Naval Aviation Center commander at the Surabaya air force base, said that 12 navy ships, five planes, three helicopters and a number of warships were talking part, along with ships and planes from Singapore and Malaysia. The Australian Air Force also sent a search plane.

Setiaya said visibility was good. “God willing, we can find it soon,” he said.

Shares in the company this morning were down 11.56 per cent.

Indonesia’s National Search and Rescue Agency chief Bambang Soelistyo said at a press conference this morning: “Based on the coordinates given to us and evaluation that the estimated crash position is in the sea, the hypothesis is the plane is at the bottom of  the sea. That’s the preliminary suspicion and it can develop based on the evaluation of the result of our search.”

Flight QZ8501 had taken off from Surabaya at 5.35am on Sunday, but lost contact 42 minutes into the journey, the reports said.

It issued no distress call, Indonesian officials had said.

The flight was bound for Singapore and was flying in cloudy weather. The Airbus A320-200 was carrying 162 people (155 passengers and seven crew), mostly Indonesians. 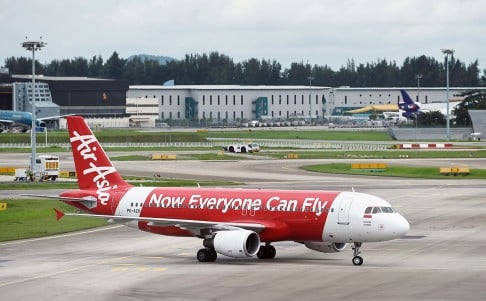 Tatang Kurniadi, head of Indonesia’s National Committee of Safety Transportation, expressed hope of locating the aircraft quickly and said it was too early to detect any of the so-called electronic pings from its black box recorder.

“We are using our capacity to search on sea and land. Hopefully we can find the location of the plane as soon as possible,” he told a news conference. 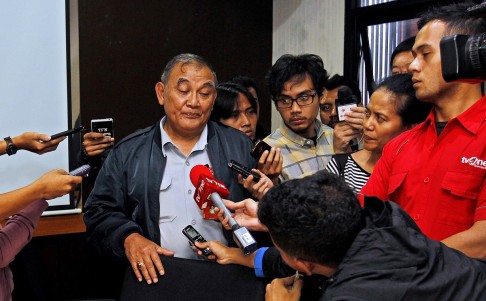 “What I need to emphasise is until now, we have not found out how the plane fell or what kind of emergency it was.”

There were also 17 children onboard, among them an infant, the general manager of Surabaya’s Juanda airport, Trikora Raharjo, said.

There were three South Koreans, including the baby; a Singaporean; a Briton; a Malaysian; and one French citizen. The rest were Indonesians, he said.

At Surabaya airport, dozens of relatives sat in a room, many of them talking on mobile phones and crying. Some looked dazed. As word spread, more and more family members were arriving at the crisis centre to await word.

The incident is the third aviation emergency involving Malaysian carriers this year. Last March, Malaysia Airlines flight MH370 vanished en route to Beijing, triggering a desperate search that lasted for months and the failure to find the wreckage leaving the passengers’ families in uncertainty.

Hua Chunying, spokeswoman for China’s Ministry of Foreign Affairs, the country that lost the most nationals on MH370, said Beijing shares “deep concerns” over the safety of people on board QZ8501.

China’s embassies in Singapore and Indonesia were keeping track of the situation, she added. 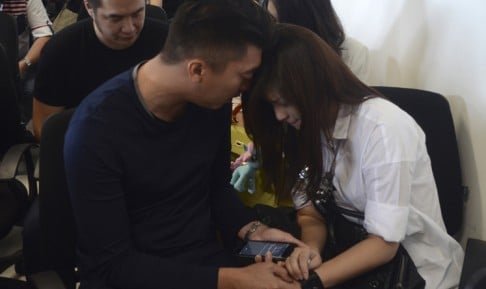 Families and friends of passengers comfort each other as they wait for news of what happened to the flight. Photo: Reuters

Bian Liangwei, whose brother was on flight MH370, said on Sunday: “I hope all the people aboard the AirAsia flight are fine. After all, there’s no confirmation yet.”

A report in The Guardian, citing local news outlet Kompas.com, said the plane crashed in Belitung Island, about halfway between Surabaya and Singapore, but this had not been confirmed by officials.

Mustofa said the plane lost contact when it was believed to be over the Java Sea between Kalimantan and Java islands. 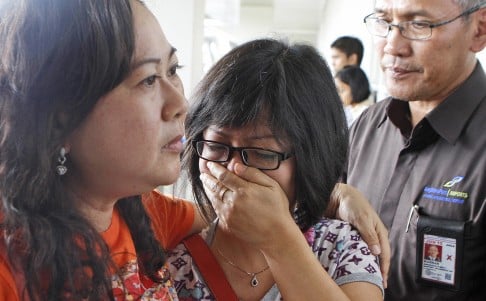 A relative of passengers weeps as she waits for the latest news on the missing jetliner at Juanda International Airport in Surabaya. Photo: AP

The plane had asked for an unusual route before it vanished, he said.

Joko Muryo Atmodjo, air transportation director at the Indonesia’s Transport Ministry, confirmed in a news conference that the pilots had requested to deviate from their original flight plan – intending to fly at 11,600 metres instead of 9,800 metres – to avoid clouds.

The plane did not send a distress signal, Atmodjo said.

“The aircraft was on the submitted flight plan route and was requesting deviation due to en route weather before communication with the aircraft was lost while it was still under the control of the Indonesian air traffic control,” AirAsia said in a statement.

Flightradar24, a flight tracking website, said the plane was delivered to the airline by Airbus in September 2008, which would make it six years old. It had recorded 23,000 flight hours on 13,600 flights. The website said the plane was flying at an altitude of 9,700 metres, the regular cruising altitude for most jetliners, when the signal from the plane was lost. 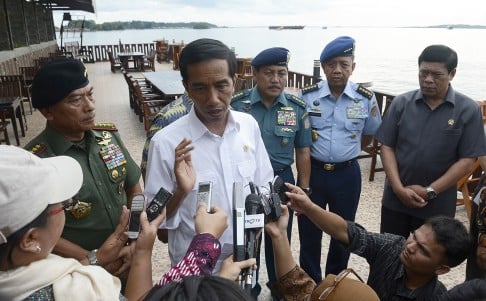 Airbus said it would provide full assistance to the investigation, and to the French authority BEA, which gets involved in such events because Airbus is France-based. A BEA spokeswoman said it was in touch with Indonesian authorities to see what assistance it could offer in the search and rescue, but had no further comment.

Indonesian Transport Minister Ignasius Jonan said search and rescue efforts now involved the army, the national Search and Rescue Agency as well as Singapore and Malaysia. But that the effort would focus on the area around Belitung island. 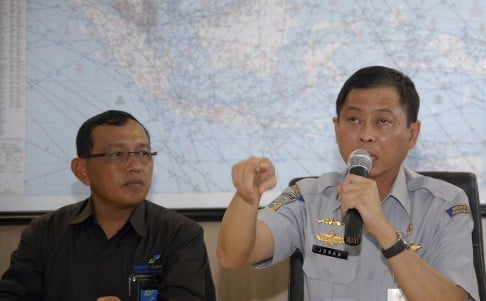 Air Force spokesman Hadi Tjahjanto said three aircraft, including a surveillance plane, had been dispatched to the area.

AirAsia CEO Tony Fernandes tweeted confirmation of the disappearance, but did not give further details. The carrier has so far said in a series of statements that both captain and first officer were experienced, with combined flight hours of 8,375 hours.

The plane had undergone maintenance on November 16.

The flight had been due in Singapore at 8.30am. The Singapore airport said on its website the status of the flight was “delayed”.

AirAsia said on Sunday morning it was investigating what happened to Flight QZ8501 and that a search and rescue operation was “under way”.

“At the present time we unfortunately have no further information regarding  the status of the passengers and crew members on board, but we will keep all  parties informed as more information becomes available,” the airline said. 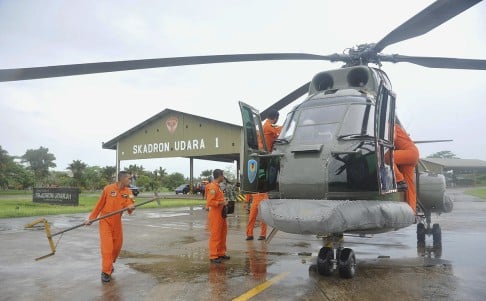 An Indonesian air force helicopter prepares to search for the missing AirAsia Flight QZ8501, from a base in Kubu Raya, West Kalimantan. Photo: Reuters

William Waldock, an expert on air crash search and rescue with Embry-Riddle Aeronautical University in the United States, cautioned against drawing comparisons to the disappearance of Malaysia flight MH370.

“I think we have to let this play out,” he said. “Hopefully, the airplane will get found, and if that happens it will probably be in the next few hours. Until then, we have to reserve judgment.”

The circumstances bode well for finding the plane since the intended flight time was less than two hours and there is a known position at which the plane disappeared, he said.

This is the first time AirAsia has seen one of its aircraft go missing.

Air Asia’s flight tracker shows the airplane’s status as uncertain and confirms it had not yet arrived at its destination. Photo:

The Civil Aviation Authority, meanwhile, said they were informed about the flight dropping off from air traffic control radars at 7.54am, 30 minutes after the disappearance.

The White House said President Barack Obama, who grew up in Indonesia for part of his childhood, was briefed on the matter of the missing plane and that they were monitoring the situation.

Singapore, Malaysia, Britain, South Korea and Australia offered to help in the search and any investigation. Malaysian Prime Minister Najib Razak said it was sending vessels and a C130 aircraft while Singapore had also sent a C130. Australian Prime Minister Tony Abbott said a P3 Orion aircraft was on standby if needed. 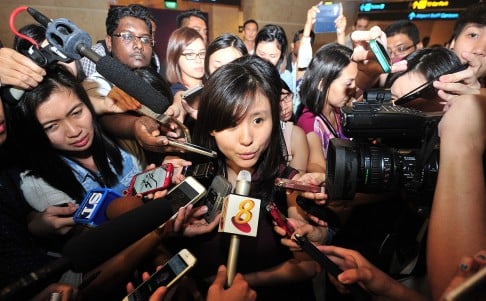 The fiance of a passenger on AirAsia flight QZ8501 speaks to the media at Singapore’s Changi Airport. Photo: Xinhua

It has been a troublesome year for airlines in Malaysia. The latest development comes just 10 months after Malaysia Airlines Flight 370disappeared, in one of the worst airline disasters in recent history.

The Boeing 777-200ER from Kuala Lumpur to Beijing lost contact with air control and went missing more than a hour after it took off in the early hours of March 8.

The incident triggered an unprecedented international search and rescue operation that spanned from the southern Indian Ocean to Central Asia and involved more than two dozen countries.

Investigators months later concluded that the plane carrying 239 passengers and crew had crashed in the ocean. 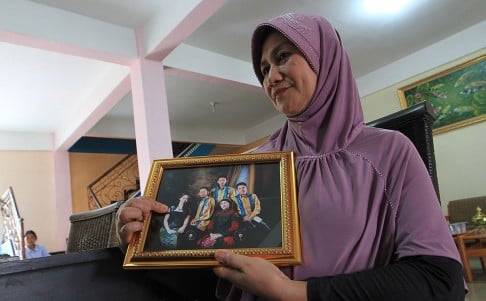 Rohana, the mother of Khairunisa, a flight attendant on missing Air Asia Flight QZ8501, points at her daughter in a family photo in Palembang, South Sumatra, on Sunday. Photo: AFP

Just four months after MH370 vanished, Malaysia Airlines Flight MH17 en route to Kuala Lumpur from Amsterdam crashed near Donetsk in eastern Ukraine on July 17 after being hit by a surface-to-air missile.

Separatist pro-Russian forces and the Ukrainian government traded accusations over who is to blame for the attack on the Boeing 777-200 airliner.

The plane splintered into pieces after being hit, killing all 298 people on board the plane, mostly Dutch citizens.

With additional reports from Associated Press

An Air Asia flight carrying 161 people went missing this morning after its pilots reportedly asked to fly higher in order to avoid clouds.

Flight QZ 8501 bound for Singapore had taken off from Surabaya at 5.35am on Sunday, but lost contact 42 minutes into the journey. It carried six crew members and 155 passengers – among them 16 children and one baby.

Many were Indonesians, but there were also South Koreans, a Singaporean, a Briton, a Malaysian and a French citizen onboard. 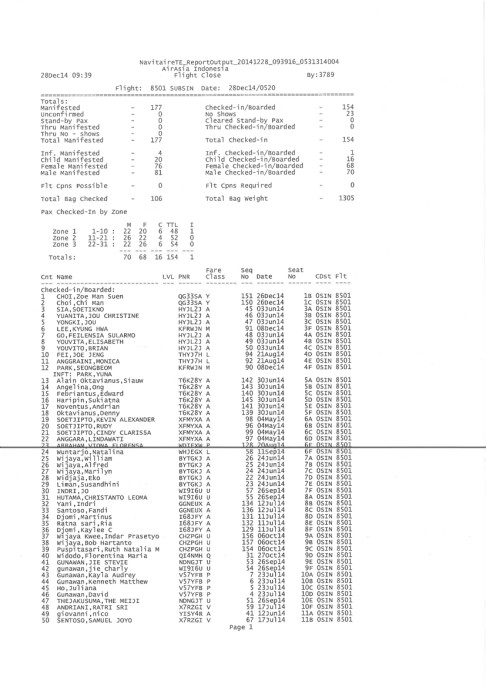 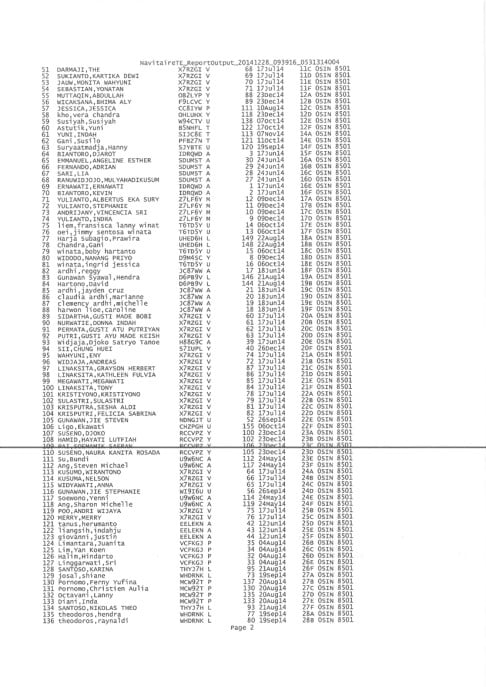 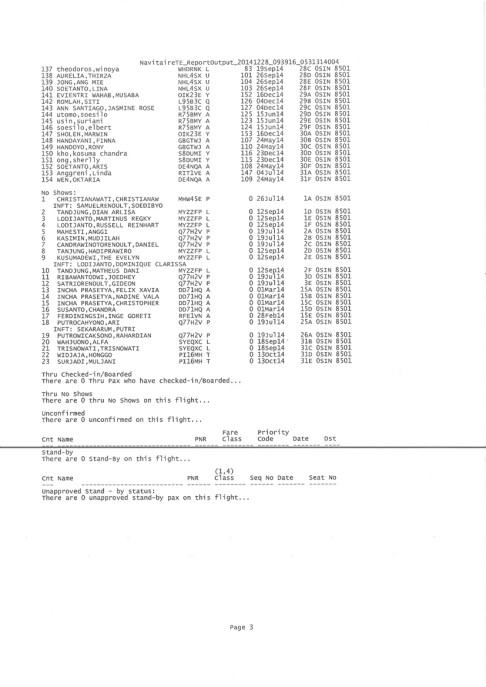