People pay their respects to victims of the 2004 tsunami at a wave shaped memorial in Ban Nam Khem, a fishing village in Thailand destroyed by the wave. 5,395 people were killed in Thailand, including 2,000 foreign tourists. – Reuters pic, December 26, 2014.

Somjai Somboon, 40, whose 13-year-old son was killed in the 2004 tsunami, cries at the memorial for tsunami victims in Ban Nam Khem, a southern fishing village destroyed by the wave, December 26, 2014. Photo: Reuters

Beachside memorials and religious services were planned across Asia on Friday to mark the 10th anniversary of the Indian Ocean tsunami that left more than a quarter million people dead in one of modern history’s worst natural disasters.

The devastating Dec. 26, 2004, tsunami struck a dozen countries around the Indian Ocean rim. It eradicated entire coastal communities, decimated families and crashed over tourist-filled beaches the morning after Christmas. Survivors waded through a horror show of corpse-filled waters.

Moments of silence were planned in several spots to mark the exact time the tsunami struck. 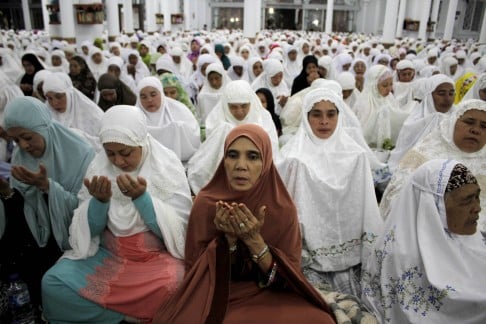 Indonesian Muslim women participate in mass praying during 10-year commemoration of Tsunami at Baiturrahman great mosque in Banda Aceh, Indonesia, Dec. 25, 2014. Photo: Xinhua
The disaster was triggered by a 9.1-magnitude earthquake, the region’s most powerful in 40 years, that tore open the seabed off of Indonesia’s Sumatran coast, displacing billions of tons of water and sending waves roaring across the Indian Ocean at jetliner speeds as far away as East Africa.

Indonesia’s Aceh province was hit first and hardest. The sea rose as high as 10 metres (33 feet) and surged inland for kilometres with seemingly unstoppable force, carrying along trees, houses, train cars — and thousands of people — in a churning rush.

In Thailand, more than 5,000 people were killed, about half of whom were tourists celebrating the day after Christmas on the country’s renowned white-sand beaches.

In Sri Lanka, where 31,000 people were killed, the water swept a passenger train from its tracks, killing 1,000 people in a single blow. A symbolic recreation of the train journey was planned as part of Friday’s ceremonies.