A man picks up money spilled by a security van in Wan Chai on December 24. More than HK$7 million is still missing. Photo: SCMP Pictures

More than HK$7 million remains missing despite two more arrests over a cash-dash frenzy in Wan Chai on Christmas Eve, sparked when a security van spilled bundles of banknotes worth HK$52.5 million onto the road.

Two cleaners, aged 60 and 68, were arrested on suspicion of theft yesterday, bringing the total number of arrests related to the cash scramble to five. The cleaners were granted police bail before midnight, police said today, and are required to report back later next month.

The two cleaners, who are colleagues, were identified after police scoured video footage that captured people picking up the spilled money on Gloucester Road.

“An initial investigation showed the pair picked up thousands of dollars each and one of them allegedly used the money to buy a new mobile phone,” a police source said. 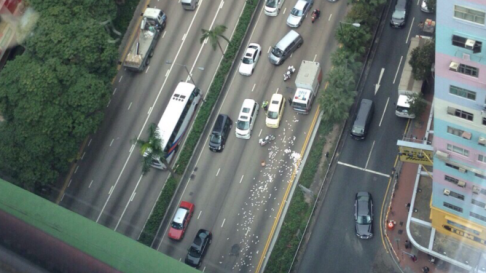 Officers picked them up at their office in the Allied Kajima Building on Gloucester Road around noon yesterday and seized the mobile phone. The building is less than 100 metres from the scene of the cash spill.

Three others – two men aged 23 and 43 and one woman, 36, – were earlier arrested. Police recovered HK$160,000 stashed under a bed in the elder man’s home in Kowloon Bay. The trio have been released on bail and none of them has been charged.

On Christmas Eve, three cash boxes, each holding HK$17.5 million, fell onto Gloucester Road when the door of the G4S security van slid open at about 1pm.

A total of HK$15.23 million went missing in the cash-grabbing frenzy. 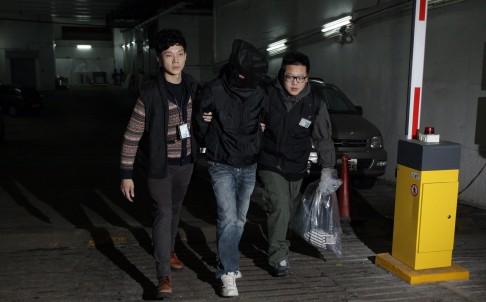 Police earlier arrested a man and found HK60,000 stashed under a bed at his home in Kowloon Bay. Photo: Dickson Lee

Four G4S employees – a driver and three security guards – were sitting in the front seat of the vehicle, which was carrying a total of HK$270 million. They did not notice the door had opened until they were in Kowloon.

Yesterday afternoon, a man and a woman returned HK$500,000 to Happy Valley police station. Police received another HK$3,000 that was mailed to police headquarters in Wan Chai yesterday.

As of 3pm yesterday, 45 people had returned HK$7.913 million to the force, according to police.

A third person was arrested last night over a cash-grabbing frenzy in Wan Chai, three days after bundles of banknotes totalling HK$52.5 million tumbled from a money transport van onto a busy road on Christmas Eve.

Two other suspects, a man and a woman, were still in custody on suspicion of theft after officers traced the pair with CCTV footage and found HK$165,000 stashed under a bed in the man’s home in Kowloon Bay, a police spokesman said. They had not been charged. The man is in the electronics recycling business while the woman is a cosmetologist. Both are said to be friends.

The man, 43, and woman, 36, were passengers in a taxi that had stopped at the scene of the cash spill.

Police repeated their warning for people who had picked up the spilled money from Gloucester Road to return it.

Barrister and lawmaker Alan Leong Kah-kit said: “If the persons who have taken cash from the scene volunteer to surrender it to the police in a short period of time, it is less likely for the police to charge them with theft as it may be harder to build a case.”

Hongkongers were confronted with the prospects of a dubious windfall when three cash boxes, each holding HK$17.5 million, fell from the side door of the van at about 1pm on Wednesday.

Drivers and passengers were seen abandoning their vehicles in the middle of the road in a money scramble that lasted about 10 minutes. Mainland tourists reportedly left their coaches and helped themselves to the Police said HK$15.23 million was gone before officers arrived.

By last night, a poll on SCMP.com found that 63 per cent of respondents said that they would not try to keep any cash they had picked up from a road spill.

As of 5pm yesterday, 38 people had brought HK$6.3 million to police, including one person who handed in HK$2 million.

All four staff members on board – a driver and three security guards – were sitting in front and did not notice the side door had slid open until they had driven past the Western Harbour Tunnel, G4S spokeswoman Sheeta Leung Hui-kwan said.

They reported the incident on reaching head office. All four have been suspended.

“We would like to offer our sincere apology to BOCHK and the public for the incident and any inconvenience or embarrassment it may have caused,” Leung said. The firm would handle the loss with the bank “according to the contractual agreement and in line with the process required by our insurance”.

Two passengers – a 43-year-old man and a 36-year-old woman – on a taxi which passed by Gloucester Road on Wednesday were arrested in Kowloon City and Tseung Kwan O respectively as police announced at around Friday midnight that a total of HK$5.69 million had been recovered after 30 persons surrendered the banknotes to police.

“We found the money stored under the bed at their homes and they admitted they took the money on Gloucester after getting off the taxi they were in,” said said police chief inspector Addy Li Chi-kin at a media briefing outside an industrial building on 20 Sheung Yuet Road in Kowloon Bay where the male suspect arrested. 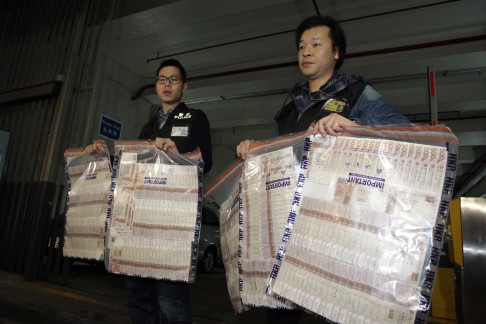 “We will arrest as soon as possible all the people [in Hong Kong] who have been identified,” Li said.

Witnesses told reporters that they saw mainland tourists leaving the coaches they were on and taking stashes of the spilled cash with them.

Asked what the police could do if those who had snatched the spilled banknotes had already left the city, Li said: “It depends whether police have already known and verified the identities of the suspects.”

Bank of China (BOCHK), which hired G4S to deliver the banknotes, said in a statement on Thursday that the security service company had offered an apology and promised to pay for the losses.