Agence France-Presse and Reuters in Peshawar

Taliban insurgents killed at least 130 people, most of them children, after storming an army-run school in Pakistan on Tuesday in one of the country’s bloodiest attacks in recent years.

Witnesses described how a huge blast shook the Army Public School in the northwestern city of Peshawar and gunmen went from classroom to classroom, shooting children.

Distraught parents thronged the city’s Lady Reading Hospital in the wake of the attack, weeping uncontrollably as children’s bodies arrived, their school uniforms drenched in blood.

Irshadah Bibi, 40, whose 12-year-old son was among the dead, beat her face in grief, throwing herself against an ambulance.

“O God, why did you snatch away my son? What is the sin of my child and all these children?” she wept.

The Tehreek-e-Taliban Pakistan (TTP) claimed responsibility for the attack as retaliation for a major military offensive in the region, saying militants had been ordered to shoot older students.

The attack began around 10.30am when a group of at least five insurgents, reportedly in military uniforms, entered the school.

A security official said hundreds of students and staff were in the school when the attack began, though according to the military the bulk of them have been evacuated.

Around five and a half hours after the attack began, the army’s chief spokesman General Asim Bajwa said the attackers had been cleared from all but one of the school’s buildings.

“These were my children. This is my loss. This is the nation’s loss,” he said.

Provincial information minister Mushtaq Ghani told reporters the death toll had reached 130, with a similar number wounded. The toll was confirmed by another provincial minister. 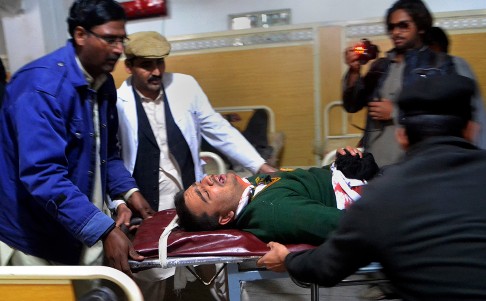 Mudassar Abbas, a physics labouratory assistant at the school, said some students were celebrating at a party when the attack began.

“I saw six or seven people walking class-to-class and opening fire on children,” he said.

One student said soldiers came to rescue them during a lull in the firing.

“When we were coming out of the class we saw dead bodies of our friends lying in the corridors. They were bleeding. Some were shot three times, some four times,” the student said.

“The men entered the rooms one by one and started indiscriminate firing at the staff and students.”

The school on Peshawar’s Warsak Road is part of the Army Public Schools and Colleges System, which runs 146 schools nationwide for the children of military personnel and civilians. Its students range in age from around 10 to 18.

The schools educate the children of both officers and non-commissioned soldiers and army wives often teach in them. 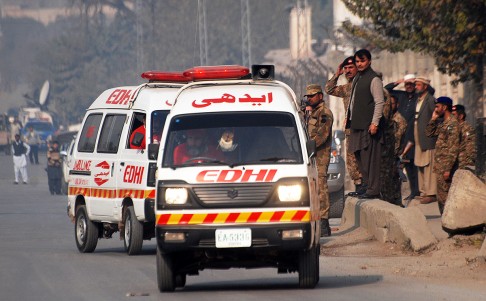 Ambulances rush the injured from these scene to hospitals in Peshawar. Photo: Reuters
TTP spokesman Muhammad Khorasani said the attack was carried out to avenge Taliban fighters and their families killed in the army’s offensive against militant strongholds in North Waziristan.

“We are doing this because we want them to feel the pain of how terrible it is when your loved ones are killed,” he said.

“We are taking this step so that their families should mourn as ours are mourning.”

The military has hailed the operation as a major success in disrupting the TTP’s insurgency, which has killed thousands of Pakistanis since it erupted in 2007.

More than 1,600 militants have been killed since the launch of Zarb-e-Azb in June.

Talat Masood, a retired general and security analyst, said the attack was intended to weaken the military’s resolve. 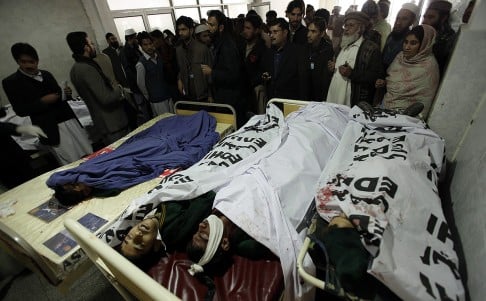 Relatives gather to identify bodies of school children at a hospital in Peshawar. Photo: EPA
“It is both tactical and strategic. The militants know they won’t be able to strike at the heart of the military, they don’t have the capacity because the army are prepared,” Masood told reporters.

“So they are going for soft targets. These attacks have a great psychological impact.”

The semi-autonomous tribal areas that border Afghanistan have for years been a hideout for Islamist militants of all stripes – including al-Qaeda and the homegrown TTP as well as foreign fighters such as Uzbeks and Uygurs.