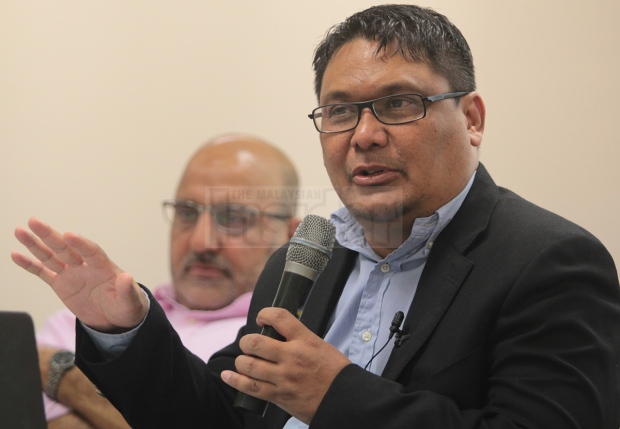 Academic and progressive Muslim thinker Dr Ahmad Farouk Musa says the Hilali-Khan translation of the Quran is problematic because of the translators’ tendency to insert their interpretations into verses of the holy text. – The Malaysian Insider pic by Seth Akmal

The seeds of the “Allah” controversy, the custody battles between Muslim and non-Muslim spouses and the spread of anti-Christian feelings in Malaysia can be traced to a certain translation of the Quran, a recent forum on Muslim extremism in Kuala Lumpur was told.

This widely available translation, called the Hilali-Khan, made Muslims think that Islam was a religion hostile to other faiths, said academic and progressive Muslim thinker Dr Ahmad Farouk Musa.

It also nurtured a belief among ordinary Muslims that it was acceptable to treat non-believers as second-class citizens and deny them equal rights, he said.

The Hilali-Khan translation is the joint work of two scholars, Dr Muhammad Taqi-ud Din Al-Hilali and Dr Muhammad Muhsin Khan, who inserted their own interpretations of the holy text according to world views that existed about 600 years ago.
It is said to be among the more controversial translations of the Quran.

This worldview was forged at a time when there was no real concept of equal rights between different religions – a core principle in modern democracies, including Malaysia.

Farouk said that this translation’s problematic interpretations of vital Quranic verses, such as those about other religions, get passed off as the real translation of Quran, when in reality they were not.

The pervasiveness of Hilali-Khan translation among Muslims makes it easy for Muslim conservatives and extremists to claim their worldview is the authentic form of Islam.

Farouk said the translation appeared more than a decade ago and its English edition was widely and freely distributed to haj pilgrims.

It has also been translated into Bahasa Malaysia and distributed to haj pilgrims from Malaysia. Copies of it can be found in mosques, libraries and some schools thoroughout the country, he said.

The result, he noted, was that Malaysian Muslims were trapped in a mental paradox.

“On the one hand, the Federal Constitution ensures equal rights to worship for all communities.

“But when they read the Hilali-Khan interpretation of the Quran, it tells them that they can treat non-Muslims as second-class citizens.

“So then Muslims can’t reconcile these two contradictions,” Farouk said.

In reality, it is a false contradiction because other translations of the Quran do not advance a Islamic worldview which is hostile to non-Muslims.

Farouk was speaking at a forum titled “Is Islam a religion of peace?” organised by the Islamic Renaissance Front (IRF) at the Nottingham University Malaysia campus in Kuala Lumpur on Sunday.

Farouk said the Hilali-Khan translation was now one of the most widely available, in mosques, schools and English translations were given to haj pilgrims in Mecca.

A key feature of the Hilali-Khan translation is that it inserts many parentheses in the middle of the verses. These parentheses contain the author’s interpretations of what a particular word or phrase might mean.

“Instead of clarifying the text or explaining a word that cannot be easily explained in English, these comments make the text difficult to follow and often distort, rather than amplify the meaning,” said Farouk, who is also founder and director of the IRF.

Muslim scholar Professor Ebrahim Moosa of Notre Dam University says Muslims have been led to believe that a centuries-old political model called the caliphate is still relevant in the modern era.. – The Malaysian Insider pic by Seth Akmal

An example, said Farouk, was the opening surah or chapter called Al-Fatihah, the most widely recited in individual prayers and public ceremonies.

The last verse of the Al Fatihah, a translation by Sahih International reads:

“Guide us to the straight path, The path of those upon whom You have bestowed favour, not of those who have evoked (Your) anger or of those who are astray.”

But the Hilali-Khan translation inserts these words:

“Guide us to the straight path, The path of those upon whom You have bestowed favour, not of those who have evoked (Your) anger (the Jews) or of those who are astray (the Christians).”

“This basically gives the impression that the Quran denounces Jews and Christians. Obviously, this is a great untruth.”

The danger was that Muslims read the interpretations in the Hilali-Khan translation and thought these words were part of the Quran itself, said Farouk.

The Hilali-Khan translation, Farouk said, was being distributed by Saudi religious authorities with money from its oil-rich government.

“I believe that propaganda such as the Hilali-Khan translation and other materials coming out of Saudi Arabia are one of the major root causes that feed extremist ideas among Muslims, violence against Christians and other minorities,” said Farouk.

Ebrahim said Muslims have been led to believe that a centuries-old political model called the caliphate was a sacred system of governance, which could still be used in the modern era.

The caliphate model developed 600 years ago when the world was divided into kingdoms and empires where political power was fused with religious authority, such as the different Muslim, Christian, Hindu kingdoms.

“This is a model that spreads religious supremacist sentiments but it is seen by some Muslim leaders as being able to solve all problems despite the fact that it is a creation of its time.”

The terrorist group Islamic State of Syria and Iraq (Isis), for instance, calls itself a caliphate and seeks to impose its version of divine authority in the territories it has conquered.

“So the question now in the modern era is whether governance in the name of God a good thing?” Ebrahim asked. – December 11, 201