Apart from the sound of the wind, the video is almost completely silent, as three young Hongkongers casually sit atop one of the city’s tallest buildings, munching on bananas.

Dubbed the “world’s scariest selfie” by the New York Daily News, the video went viral almost immediately after it was uploaded earlier this year. As of writing, a version on YouTube has almost three million views.

“I didn’t mean to get that kind of attention,” 23-year-old Daniel Lau tells theSCMP. “I think the thing that caught the [world’s] interest was my friends eating bananas.”

Calmly munching on fruit while perched hundreds of metres in the air may seem incongruous at first, but in fact it’s in keeping with the philosophy espoused by Lau’s “urban exploration” team Exthetics, which includes 22-year-old Dex Ng and 23-year-old Lawrence Tsui. The name is a “combination of extremity and aesthetics”, says Lau, emphasising that while some rooftoppers – the small subculture who have conquered skyscrapers from New York to Dubai to Shanghai – take great photos and others do stunts, “we try to combine both to make it artwork that people can appreciate”.

All three speak of the pleasure of visiting parts of Hong Kong that are largely unknown or unappreciated by the rest of the population. “That’s why we don’t just focus on rooftopping,” says Ng. “We try to go to many different places, above or below ground. We try to look for a different angle on the city.”

“I love visiting MTR stations that are still under construction. And some ‘haunted’ places in Hong Kong because when we go inside, it’s absolutely quiet, and often we’re the first ones who have been inside for a long time.”

https://instagram.com/p/syoXgGIsXI/embed/?v=4“It’s really hard to find a place in Hong Kong that’s completely quiet, where I can actually hear my blood flowing in my ears,” Tsui adds. “That feeling is just amazing.”

Ng says that exploring gives the rare opportunity to “focus on yourself and the environment around you”. 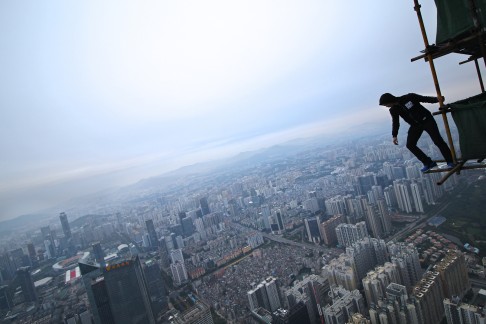 Occasionally this can mean going to a place the authorities would rather they didn’t, but Lau says that an apology and a quick exit usually pacify security guards. They combine that with a strong sense of respect for the places they visit.

“Don’t do any damage. Don’t paint on the walls. Respect the place. It’s private property,” he says.

While all three Exthetics members speak of their love of photography, and their work is a testament to this, they’re quick to point out that many urban explorers are happy just to go to a place for the experience. 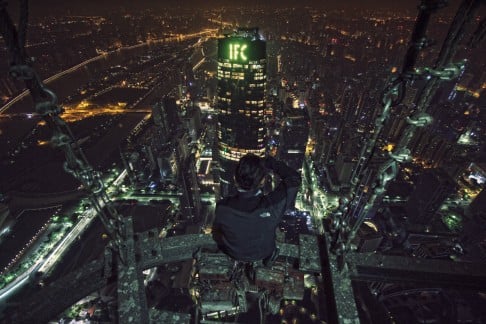 “I’ve met a lot of local rooftoppers who are very low profile,” says Lau. “They like to explore often, but they just do it to relax, to get away from city life.”

“They just pay a visit to those places,” adds Ng.

Hong Kong is attracting foreign rooftoppers and urban explorers. This year, two high-profile foreign teams released videos shot in the city, including one from the roof of The Centre, site of Lau’s famous banana selfie.

“We chose Hong Kong because of the city’s many skyscrapers,”  Alexander Remnev of the “Crazy Russians” told the SCMP last month. 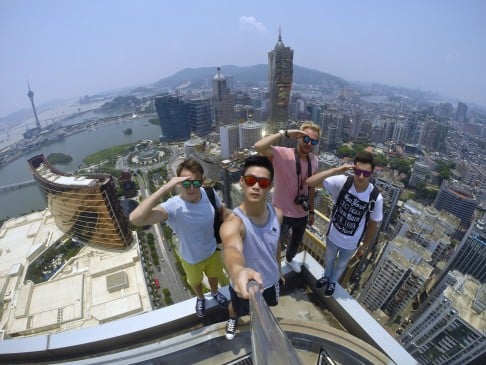 “From the top all the other buildings seem tiny,” Remnev wrote in an account of his trip. “At that height it’s all peace and quiet.”

Vitaliy Raskalov and Vadim Makhorov, who made headlines around the world when they published a video of themselves scaling the world’s second tallest building, the Shanghai Tower, have also visited Hong Kong.

“Shanghai is bigger than Hong Kong and it’s polluted and cold,” Raskalov said in February. “The buildings in Hong Kong are so close together that we just had to look up from the ground and choose the nearest tall building to go into. There was no pollution and it was sunny.”

“Of the top 100 tallest buildings in the world, more than 50 of them are in Hong Kong,” Lau points out. “That attracts a lot of explorers.” 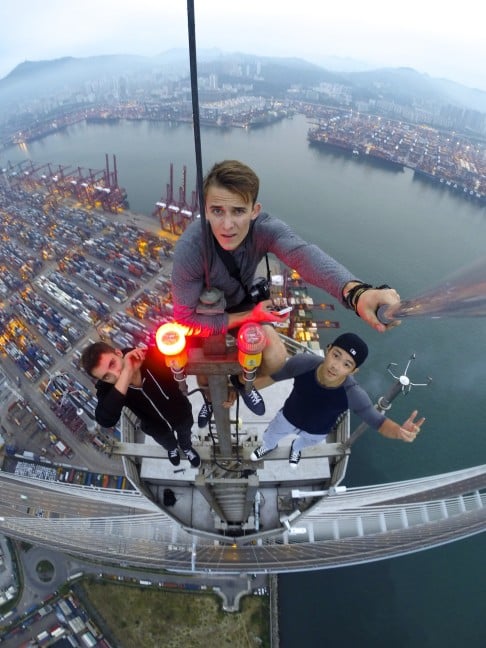 Lau is concerned that as the city becomes more popular, competition between teams will increase, and with it the danger, as has occurred elsewhere.

“In Russia, they compete to be the first one to get to that roof, or to take the scariest photo ever. We’re not trying to do that,” he says.

“You have to know your limits.”