Pearls of wisdom from Malcolm Gladwell

Malcolm Gladwell was in Hong Kong at an interesting time. Here to address a crowd at the Barclays Asia Forum, he had been fascinated by the view from his hotel room of umbrella movement tents.

“I can’t comment on the exact issues [of the protest] because I simply don’t know about it well enough,” says the Canadian author and journalist.

“But I’m drawn to anyone who is agitating a path to democracy. So in a broad sense, I’m in sympathy.”

Gladwell was curious, however, about “the decision to just let the protesters be”, on the ground. “I wonder, whether on some Machiavellian level, if you are in a position of power, if that isn’t the best way to preserve the status quo,” he says.

That links to an issue that’s been on Gladwell’s mind a lot lately: how people in power deal with dissent in society. Global headlines hammer the point home well enough, but the author’s interest focuses on “the matter of tactic” rather than politics.

“For example: if America had a very different response to the terrorists’ provocations of 15 years ago, would it be better off?”

Author of The Tipping Point (2000), Blink (2005), Outliers (2008), What the Dog Saw (2009) and David and Goliath (2013), Gladwell was in Hong Kong to impart unconventional pearls of wisdom to bankers, industry leaders and financial heads at a time when industry status quos are being challenged.

Never one to shy away from controversy, he appeared on Bloomberg TV on November 13 and called American football a “moral abomination”.

“We’re not just talking about people limping at the age of 50. We’re talking about brain injuries that are causing horrible, protracted, premature death,” he said. 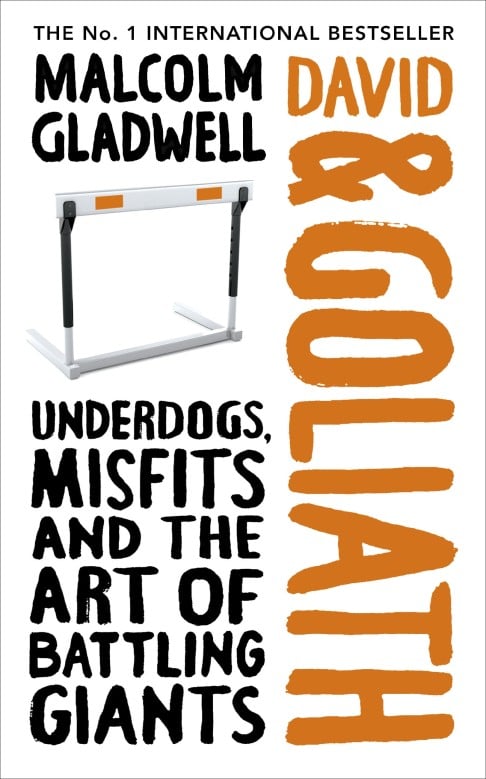 As one of today’s most prolific, bestselling authors, and listed among Time magazine’s 100 Most Influential People, Gladwell is a demigod to his most ardent fans. In person, he has a quiet, calm wit and Zen-like focus, especially noticeable among suited and booted financial alphas.

“I grew up in a household that had a healthy respect for curiosity,” says Gladwell, perched on a stool.

As a child, it was normal to “look at something and wonder why it was so, and why it wasn’t different.”

He describes his parents, British maths professor Graham and Jamaican psychotherapist Joyce, as irreverent. “I don’t mean that in a countercultural way,” the 51-year-old says. “They are willing to question things and entertain acts of intellectual rebellion.”

“I suppose my parents normalised the things that I do for a living,” he says. “I never felt that I was doing something strange, or venturing out on some limb. I just felt I was being pretty consistent with my belief system.”

Despite how radical his outlook might seem to others, Gladwell insists he is “really quite normal” in his tastes.

His work as a journalist for The New Yorker magazine (chronicled in What the Dog Saw) started with a commission about fashion. But instead of writing about the usual expensive dresses, Gladwell took on the humble, cheap T-shirt – an early example of works looking into obvious, yet mostly ignored, aspects of subcultures.

“Mainstream things, or big obvious things, are often more interesting; there’s more going on,” he says. “It’s harder to do something for a mass audience than it is to do for an elite audience.”

A favourite example of this is the car he drives.

From the sheer arc and range of information presented, readers might expect that his book ideas originate from some convoluted, mystifying formula, but Gladwell insists he has no system or formal procedure.

They come when he finds himself “thinking about the same problem over and over again in different ways”.

He uses vivid narratives loaded with anecdotes about playing tennis or everyday snap judgments, bringing ideas to life for readers who might tire of more academic texts that often cloud issues with wordiness.

Despite widespread public and critical approval, not all his reviews have been glowing. Noted psychologist Steven Pinker once called him a “minor genius”, albeit one who “unwittingly demonstrates the hazards of statistical reasoning” and “occasionally blunders into spectacular failures”.

Gladwell retorted, calling Pinker the “lonely ice floe of IQ fundamentalism”. Their exchange (through The New York Times’ Book Review section) is fascinating and entertaining, and thoroughly worth reading.

The way Gladwell extrapolates from bulky statistical and scientific data is often strikingly elegant and certainly unexpected. This accessibility and ambition makes Gladwell’s books so popular with the public, but is also a major point of contention with critics.

“Oh, I don’t take it at all very seriously. I think it’s a very silly criticism,” he says. “When you take complicated ideas and you put them in the form of a narrative that makes it personal, you broaden their appeal and make it easier for people to understand you.

As long as we remain true to ourselves, there will be a market for people wanting to talk about interesting things in smart ways
MALCOLM GLADWELL

“I’m always puzzled by people who criticise me for the lengths I go to make sure that I can reach a broad audience and that we can all follow along. I thought we were all in favour of that, but some people, I suppose, are snobbish.”

For all his academic upbringing, Gladwell prefers to think for the masses than some lofty, highbrow elite. And although much of his work is focused on correcting common social, perceptual and decision-making biases, he has an irrepressible optimism for the people who make them.

“We very often do the general public a disservice by assuming that they are unwilling and incapable of handing sophisticated ideas,” he says.

“It’s just nonsense. People are much more intelligent than that … The reading audience is more sophisticated today than at any other time in history, so I take my audiences’ intelligence very seriously. If I can handle it, they can handle it’ is my position, and I think that, in my experience, has proved to be correct.”

And while the public and cultural polemicists bemoan the shift towards society’s digesting of information in rapid, short-form and visual ways in this digital, post-modern age, Gladwell does not have the same concern.

His glass-half-full attitude posits that the younger generations might be taking in equally sophisticated ideas, but “just in different forms”. The perceived dumbing down of society is something that he says he is not “remotely concerned with”, but he does acknowledge that people have far more distractions to deal with today.

Human beings are, Gladwell argues, fundamentally curious creatures who will always like to “engage in sophisticated ideas and thinking”. While some traditional methods might be left by the wayside, “no technological shift can erase human curiosity … So as long as we remain true to ourselves, there will be a market for people wanting to talk about interesting things in smart ways”, he says.

“Perhaps my ability to criticise is a function of my optimism. That is to say, I’m sufficiently secure in the notion that the world is headed in the right direction that I feel free to correct it when it occasionally goes off course.”

This article appeared in the South China Morning Post print edition as Wisdom from the edge
PUBLISHED : Thursday, 20 November, 2014, 5:13pm