The most notorious black market in Hong Kong doesn’t involve drugs, or ivory … but cookies

Jenny Bakery, the home-grown butter cookie phenomenon, is a familiar brand to locals and tourists alike. Rumours have it that even chief executive Leung Chun-ying serves the famous sweet snacks to visiting VIPs.

But, the bakery is also shrouded in mystery. A boom in popularity, fuelled mostly by food bloggers and supported by crowds of eager buyers from the mainland and across Asia, has led to interminably long lines at the bakery’s two branches, and has given rise to a vibrant cookie underground.

It’s a kind of butter cookie black market employing armies of buyers, hawkers and resellers in the commercial buildings of Tsim Sha Tsui.

The recent introduction of a three-tin quota, aimed at discouraging resellers, has done little to stem the flow of black market cookies because there are always plenty of people willing to line up for a small fee.

Surprisingly, despite the proliferation of biscuit resellers who offer tins for a small mark-up to customers too impatient to wait in line, a daily queue still forms in front of Jenny Bakery’s two shops.

The long lines are a source of confusion to visitors and consternation to old-time Jenny cookies fans.

They remember a time not so long ago when it was possible to snap up a tin on your lunch break, when the cookies beloved by Hongkongers were mostly unknown outside the city. 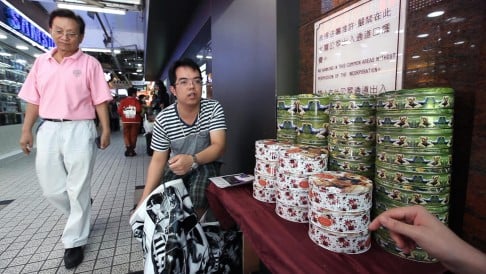 Tins of Jenny Bakery cookies in Tsim Sha Tsui.
Those with a sense of history are less likely to be surprised by the fuss. It turns out Hong Kong has a long history of baked goods induced hysteria.

In his 1998 book, Comrades and Capitalists: Hong Kong Since the Handover, Rowan Callick describes mobs that descended on Saint Honore’s bakery outlets across Hong Kong and became so unruly that the police had to be called in.

Queues of more than a thousand people formed in reaction to news that the bakery might be shutting down, with people waiting for hours to redeem vouchers for baked goods.

Similar scenes were seen under the British. In 1984, panicky throngs swarmed outlets of Maria’s Bakery, run by Maria “Queen of Cakes” Lee Tseng Chiu-kwan. Cake lovers’ fears proved unfounded, but made the bakery’s subsequent surprise closure of its more than 100 outlets in 1998 all the more stinging.

In the end, competing bakeries were forced into the awkward position of accepting Maria’s Bakery vouchers to quell public furore, and make sure the city’s much loved bakery voucher gifting system kept its credibility.

Today, resellers of Jenny’s cookies, in what has been termed – tongue slightly in cheek – “the cookie black market“, claim they are doing nothing wrong, and are just an example of Hong Kong’s entrepreneurial spirit.

But their actions belie their words: they wear face-concealing masks, flee the camera and, for the most part, refuse to comment on the record. While reporting in front of Chungking Mansions, the Post film crew, holding cameras and recording equipment, was offered counterfeit watches, faux designer handbags and drugs such as hashish.

But the cookie hawkers – mostly older women and university students – gave our cameras a wide berth, often running from our reporters.

The murky situation isn’t made any clearer by the company, whose representatives have repeatedly refused requests for interviews.

The evasive employees, working out of makeshift and cluttered official bakery outlets – though the operation must be making money, this was not apparent in the crumbling shops themselves – left us even more stumped than when we began.

There were even more questions when we finally got on our hands on the coveted biscuits.

It was a goodcookie to be sure, but just a cookie all the same. 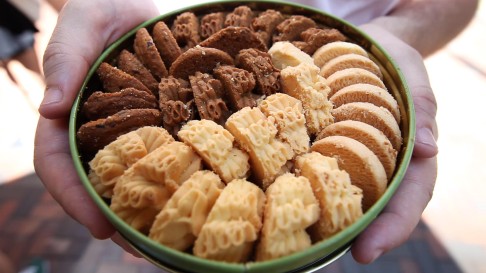 Cookies from Jenny Bakery are sold on the black market. Photos: Robin Fell