A young American woman with terminal cancer has committed suicide, following promises to do so that had triggered shock and controversy over the right to die.

Brittany Maynard, a 29-year-old brain cancer sufferer, made headlines last month when a video of her making her suicide threat went viral and was seen by millions of web users.

Sean Crowley, spokesman for Compassion & Choices, an end-of-life activist group that supported Maynard, said she had died peacefully in her home on Saturday.”We will work to carry on her legacy of bringing end-of-life choice to all Americans,” the organisation’s president, Barbara Coombs Lee, said.

In January, Maynard was given six months to live and told her death would be painful because of the aggressive nature of her cancer. 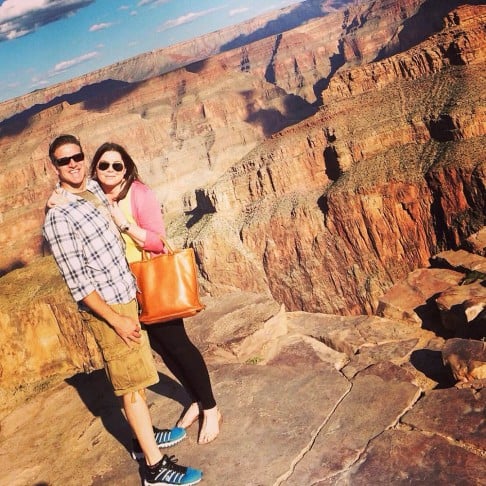 In this October 21, 2014 file photo provided by TheBrittanyFund.org, Brittany Maynard and her husband Dan Diaz pose at the Grand Canyon National Park in Arizona. Photo: AP
She had been trying for a first child with her husband Dan Diaz at the time, but gave up due to her disease.

Maynard and her husband, who had just married when she began having severe headaches, moved from their home in California to Oregon, one of a handful of US states with a “right-to-die” law. A doctor was then able to prescribe her the medication she needed to end her own life, surrounded by her family in the bedroom she shared with her husband.

On Thursday, she had released a new video in which she said she might temporarily delay her appointment with a self-administered cocktail of potentially deadly drugs.

But the delay was a short one.

Her story has made headlines around the world, and she was featured on the cover of last week’s People magazine in the United States.

Maynard had in recent weeks and months been working to tick off items on a “bucket list” of what she wanted to do before she died, including travelling to the Grand Canyon last week.