Hardy Kam celebrates with his chefs the awarding of a Michelin star to Kam’s Roast Goose restaurant in Wan Chai. Photo: Nora Tam

Two years after losing a high-profile court case, one branch of the family behind the famous Yung Kee roast goose restaurant yesterday savoured the success of seeing its new restaurant included in the latest Michelin Guide.

A lengthy legal battle between brothers Kinsen Kam Kwan-sing and Ronald Kam Kwan-lai split the family, with the younger Ronald gaining control of the restaurant in Wellington Street, Central.

“It’s a new beginning here,” said Hardy. “I no longer think about the court case. I focus on continuing dad’s spirit.” 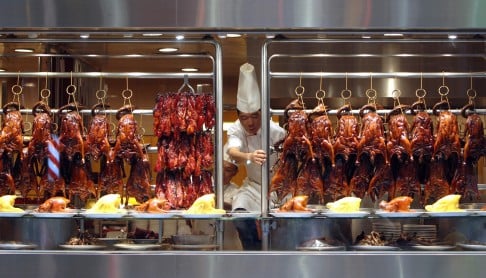 The new restaurant is a modern twist on nostalgia – the sauce and selection of geese are done in the traditional way following Kinsen’s recipe, but roasted on a gas stove instead of charcoal. Hardy Kam said it was important to preserve the techniques.

“The new generation puts too much emphasis on money and forgets about tradition,” he said.

The Michelin Guide awarded between one and three stars to 64 restaurants in Hong Kong – two more than last year.

Young foreign chefs seeking to reinvent dining also gained recognition. Olivier Elzer, who has worked with French chefs Joel Robuchon and Pierre Gagnaire, got one star for his Seasons.

Chef Nurdin Topham, whose restaurant NUR opened this year and won a star, puts strong emphasis on nutrition and environment-friendliness, sourcing 60 per cent of his ingredients from local farms during summer. 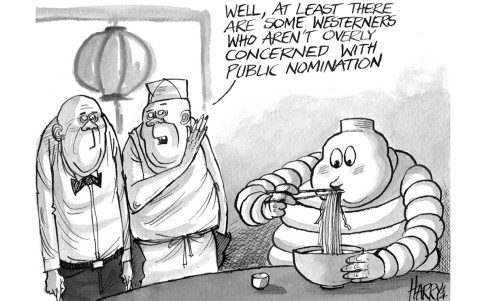