A Chinese man eats noodles at a restaurant in Beijing. Photo: AP

A noodle shop owner was detained after he was discovered to have been adding parts of a poppy plant – from which opium is made – to food so that customers would keep coming back.

The noodle shop’s owner was held for questioning and confessed that he purchased 2kg of poppy shells (the bud of the plant in which poppy seeds are found) for 600 yuan (HK$756) in August.

He secretly added it to the food to lure in more customers.

The owner was detained for 10 days. Poppy shells used to be an ingredient in a popular hot pot sauce until the product was banned, according to previous reports.

The restaurant’s activities came to light after one customer, Liu Juyou, 26, tested positive during a routine urine test under an anti-drink-driving programme, the Xian Evening News reported on Tuesday.

He said he never touched illegal substances, so was shocked by the test result.

Liu was detained for 15 days from September 3, unable to convince police that the drug, he suspected, might have come from the food from a noodle shop he frequented.

Liu asked his family to help him test the theory, eating noodles at the restaurant and going home to take urine tests. When the relatives also tested positive for drugs, they alerted the police, who launched an investigation.

An anti-narcotics police agent said that chemicals from poppy, even poppy seeds, could build up in the body – enough to get a positive for opiates on a drug test. 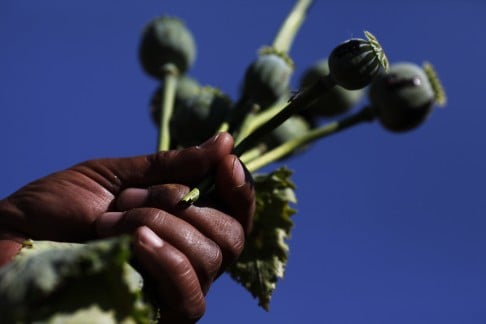 Poppy plant seeds are safe for human consumption, and widely used in Western cuisine, but consumed in large amounts, a person can test positive for drug use. Photo: Reuters

If the food is ingested over a long period of time, it would have an addictive effect, he said.

However, despite finding the restaurant culpable, Liu’s appeal against his detention was dismissed by police, who said their priority was to detect drugs and punish drug users.

The mainland’s anti-drug law bans opium, heroin, morphine, marijuana and any other anaesthetic and psychotropic drugs which can be addictive.

Chinese police have sought to step up efforts against illegal drugs. Over the past six months, they have arrested more than a dozen celebrities on drug-related charges, including famous mainland screenwriter Ning Caishen and director Zhang Yuan.