The daughter of Robin Williams has quit social media, upset by internet trolls and the online pilfering of photos of her Oscar-winning father following his death by apparent suicide.

“I will be leaving this account for a bit while I heal and decide if I’ll be deleting it or not,” Zelda Williams, 25, wrote on Instagram beneath a photo of a butterfly.

“In this difficult time, please try to be respectful of the accounts of myself, my family and my friends,” she asked.

Monday’s death of Williams – one of the finest comedy talents of his generation – at the age of 63 prompted a global outpouring of public grief on social media.

Tabloids ran wild with speculation that he might have been pushed to the edge by supposed money problems and the cancellation of his CBS sitcomThe Crazy Ones after one season.

He had three films in post-production: Night at the Museum: Secret of the Tomb, Merry Friggin’ Christmas and Absolutely Anything directed by Monty Python alumnus Terry Jones. 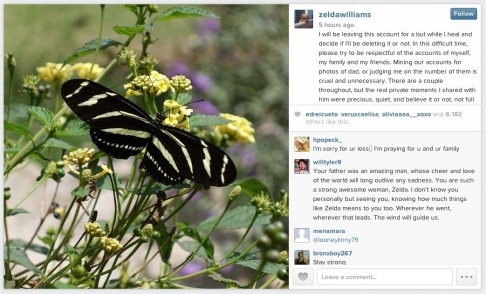 In her Instagram post, Zelda Williams expressed frustration at the way family photos posted online had been used, and how internet trolls had attacked her.

“Mining our accounts for photos of dad, or judging me on the number of them is cruel and unnecessary,” said the actress, who appeared with her father in the 2004 drama House of D.

Williams – whose hit films included Good Will Hunting, Good Morning Vietnam and Mrs Doubtfire – was found dead in his San Francisco area home on Monday by his personal assistant, hanging by a belt with superficial cuts to his wrist.

The father-of-three, who had made light of his troubles with substance abuse and his stints in rehab, had been seeking treatment for severe depression.

Funeral details have yet to be publicly announced.

In New York, Broadway theatres darkened their marquees on Wednesday evening for one minute in Williams’ honour.

Show business trade journal Variety reported a surge in online sales of Williams’ rich body of work, with 12 of the 13 top-selling DVDs on Amazon.com featuring the comic genius.

Topping the list was Mrs Doubtfire, followed by Good Will Hunting, Dead Poets Society, Good Morning, Vietnam, Patch Adams, The Birdcage and What Dreams May Come.