Yazidis shelter in a refugee camp in Iraq. Photo: Reuters

Islamist extremists in Iraq killed 80 Yazidi men and abducted their wives and children, witnesses said yesterday, insisting the religious community was still at risk after a week of US and Iraqi airstrikes on the militants.

Airstrikes, meanwhile, targeted insurgents around Iraq’s largest dam, which was captured by the Islamic State extremist group earlier this month, according to nearby residents. It was not clear who carried out the strikes.

The United States began launching airstrikes against Islamic State a week ago, in part to prevent the massacre of tens of thousands of Yazidis stranded on a mountaintop. After most were able to escape with the help of Kurdish fighters, US President Barack Obama took credit for alleviating the threat of genocide.

But on Friday Islamic State fighters who had surrounded the nearby village of Kocho 12 days ago, demanding its Yazidi residents convert or die, moved in. 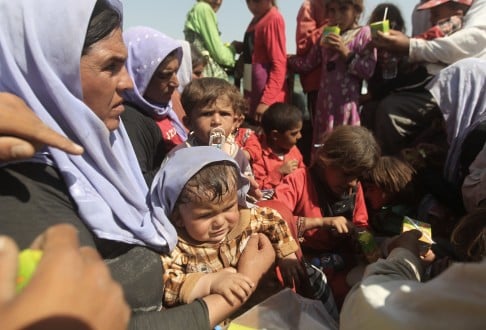 The militants took the men away in groups of a few dozen and shot them dead with assault rifles on the edge of the village, according to a wounded man who escaped by feigning death.

The fighters then walked among the bodies, finishing off any who appeared to still be alive with their pistols, the 42-year-old man said by phone from an area where he was hiding out.

“They thought we were dead, and when they went away, we ran away. We hid in a valley until sundown, and then we fled to the mountains,” he said.

Yazidi lawmaker Mahma Khalil said the men in Kocho were given the choice to convert or die. “When the residents refused to do this, the massacre took place,” he said.

Halgurd Hekmat, a spokesman for Kurdish security forces, said the militants took the women and children of Kocho to the nearby city of Tal Afar, which is controlled by Islamic State. 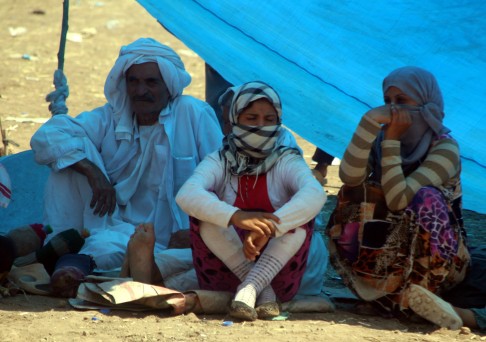 Members of the Yazidi religious minority arrive at the Syria-Iraq border in the north. Photo: EPA

Elsewhere in northern Iraq, residents living near the Mosul Dam said that the area was being targeted by airstrikes, but it was not clear whether the attacks were being carried out by Iraq’s air force or US jets.

The extremists seized the dam on the Tigris on August 7.

Tens of thousands of Yazidis fled when Islamic State earlier this month captured the northern Iraqi town of Sinjar, near the Syrian border.

The plight of the Yazidis, tens of thousands of whom were stranded on a desert mountaintop for days, encircled by the Islamist extremists, also prompted US and Iraqi forces to launch aid drops. It also contributed to the US decision to launch airstrikes against the militants, who were advancing on the Kurdish regional capital Arbil.

Most of those Yazidis were able to escape to Iraq’s largely autonomous Kurdish region with the help of Kurdish fighters. 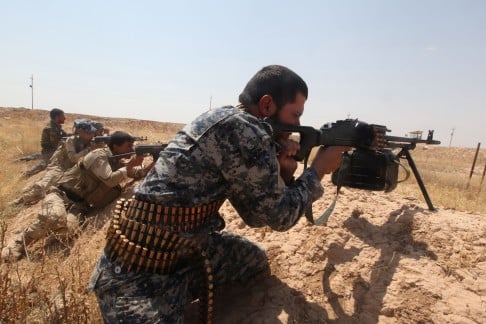 Volunteers who joined the Iraqi army to fight against Jihadist militants of the Islamic State (IS) hold a position north of Baghdad. Photo: AFP

But Islamic State remains in control of vast areas of northeastern Syria and northern and western Iraq, and the scale of the humanitarian crisis prompted the UN to declare its highest level of emergency earlier this week.