A woman cries as she stands in the rubble of her home in Longtoushan town – the epicentre of the earthquake.Photo: Reuters

The death toll from the magnitude-6.5 earthquake in Yunnan jumped to 610+ yesterday, as the 72-hour “golden period” for finding more people alive lapsed.

Local fire services said rescue work would continue, as reports emerged of the “miraculous” survival of an 88-year-old woman who was buried under rubble in Ludian county for over 50 hours. (updated 06.08.2014)

Southwest China jolted by a strong quake on Sunday killing at least 610+, injuring more than 1,900 and damaging property as further tremors affect the region.

Agencies and He Huifeng

Paramilitary policemen carry an injured child on a stretcher during rescue operations after an earthquake hit Ludian county in Yunnan province. Photo: Reuters

A magnitude 6.5 earthquake struck Zhaotong city in Ludian county on Sunday afternoon killing at least 400 people, local authorities said. The China Earthquake Networks Centre said the quake occurred at a depth of 12 kilometres. More than 80 people had injuries, including a female student buried when a school collapsed.The earthquake happened at around 4.30pm, as it was felt strongly in several nearby cities, including Kunming in Yunnan province, Chongqing, Leshan and Chengdu in Sichuan province. 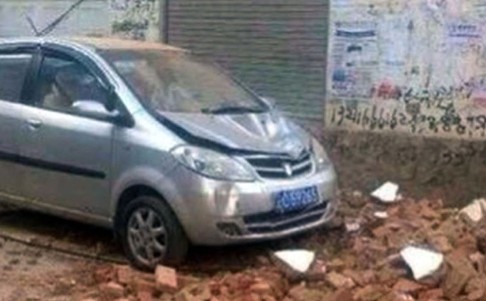 Local residents posted pictures online soon after the quake, showing broken doors and windows and cracks on the walls.

A resident in Zhaotong city told the South China Morning Post, the earthquake was not too severe and he heard no buildings had collapsed in his area during the earthquake. 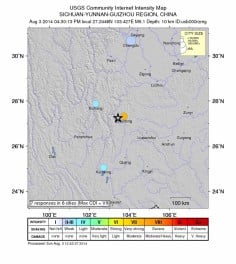 According to Xinhua, People’s Liberation Army units stationed around Zhaotong sent a team to the epicenter in Ludian county. Provincial seismic authorities also despatched a team of 30 staff to inspect the quake zone.

Separately, the US Geological Survey, which measured the tremor at 6.1 magnitude, warned “Overall, the population in this region resides in structures that are highly vulnerable to earthquake shaking”.

Earlier, at 1.57pm, another quake of magnitude 5.0 jolted neighbouring Shigatse prefecture of Tibet, Xinhua reported. No reports of casualties had been received from there.

Southwest China lies where the Eurasian and Indian tectonic plates meet and is an area prone to earthquakes. 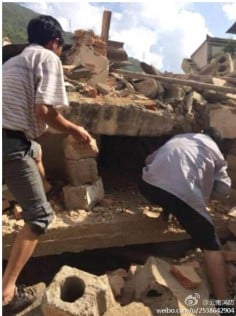 Locals search among the rubble in Yunnan. Photo: Screenshot weibo

In 07.09.2012, 80 people were killed when twin earthquakes struck the mountainous border area of Yunnan and Guizhou.

Two more earthquakes were recorded in the Asia Pacific region over the weekend.

A 6.0-magnitude earthquake struck off the coast of Japan’s Okinawa island on Sunday, according to the Pacific Tsunami Warning Centre. The quake struck at a depth of about 10 kilometres, 200 kilometres north-northeast of Okinawa’s capital city of Naha. No tsunami warning was issued

On Saturday, a magnitude 6.6 tremor struck 350 kilometres off the coast of Manus Island in Papua New Guinea at a depth of 13.4 kilometres, the US Geological Survey reported. No tsunami warning was issued, the Pacific Tsunami Warning Centre said. Cracks and broken plaster at a building in Zhaotong city. Photo: Screenshot weibo

A magnitude 6.4 earthquake struck off the coast of the southern Philippines in 14.07.2014, the US Geological Survey (USGS) said, but there were no reports of damage and no tsunami warning was issued.

The epicentre of the quake was 146 kilometres east of the town of General Santos on the southern island of Mindanao, southeast of Cebu, the USGS said.

The USGS initially said the quake was magnitude 6.