Smoke rises from the factory as workers gather outside in charred, tattered clothes following the explosion yesterday. Photo: Imagine China

A total of 71 people were killed and almost 200 injured in a huge explosion at a Taiwanese-owned factory in Jiangsu yesterday.

Initial investigations indicated that sparks had ignited dust at the car wheel polishing plant in Kunshan, 50km west of Shanghai, at 7.37am, CCTV said. The factory is owned by the Taiwanese company Zhongrong Plating, it said.

It broadcast images of black smoke billowing from the low-rise factory building, with the injured lying on makeshift wooden beds and being loaded onto trucks and ambulances.

“The scene is a mess, it’s unrecognisable,” one person claiming to be a witness wrote on Sina Weibo.

President Xi Jinping and Premier Li Keqiang called for “all efforts” to be made in the rescue and treatment of victims. Relevant authorities were urged to strengthen workplace safety standards. 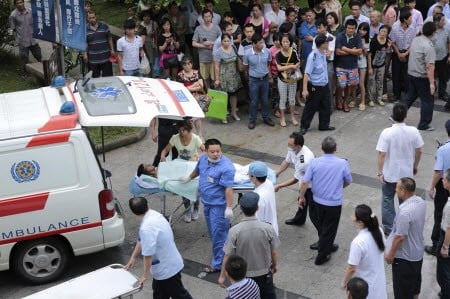 Medical personnel transport a victim at a hospital after the explosion. Photo: Reuters

Kunshan hospital staff said they had admitted more than a hundred victims, mostly suffering from burns and smoke inhalation. They had requested help from major hospitals in Shanghai, and had asked residents to donate blood at temporary collection points.

Zhongrong Plating employs 450 workers and counts General Motors and other US firms among its clients. More than 200 employees were working overtime when the blast happened, Kunshan authorities said. Police had detained five company executives, Xinhua reported. 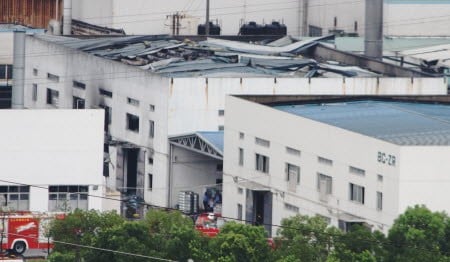 The roof of the damaged workshop in the aftermath of the explosion. Photo: AP

The cause of the explosion is still being investigated but an accumulation of flammable metallic dust in the air may have come into contact with live sparks, the Kunshan government said. Such explosions have become rare in modern factories equipped with ventilation systems.

“I find it hard to believe that so many lives were lost. This is an old industrial town. We have not seen anything so deadly,” said the owner of a restaurant near the scene of the disaster. 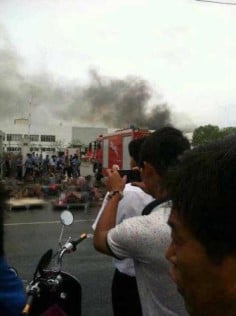 “It was not the kind of huge blast that shattered glasses or threw you off your bed. Many people living nearby were not sure they had heard it.”

A pharmacy worker who lived nearby did not hear the blast.

“I learned the news from my mobile phone. I went to the factory to see if I could help but the police and government rescuers were already there keeping people away,” he said, declining to be named due to the sensitivity of the issue.

“The factory seemed to be a mess inside, with lots of smoke, but almost everything outside remained intact. The death toll was high probably because the destructive force was confined to a narrow space.”