Anxiety over subterranean threat has stoked unprecedented domestic support for Israel’s campaign, despite international condemnation
The Washington Post in Jerusalem

An Israeli officer in a tunnel said to be used by Hamas militants to launch cross-border attacks.Photo: Reuters http://www.scmp.com/news/world/article/1564438/hamas-digs-israelis-deepest-fears-newly-discovered-terror-tunnels

Of all the threats posed by Islamist militants in the Gaza Strip, nothing – not Hamas drones, not rockets that reach Tel Aviv – can match the fear Israelis feel about the dozens of newly discovered “terror tunnels” burrowed into their backyards.

Internet videos posted by the Israeli military and its antagonist Hamas, which show masked militants armed with rocket propelled-grenades crawling out of holes in the ground, have shaken Israel. So have stories, almost certainly untrue but widely promoted by social media, that children in Israel can hear shovelling beneath their beds. 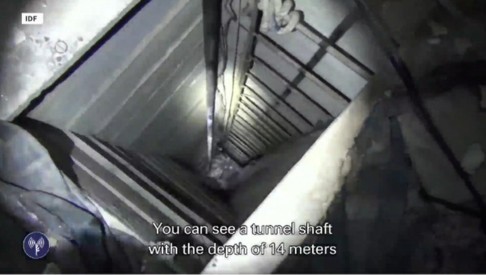 A video released by the Israel Defence Forces said to show a tunnel in a mosque where militants hid tools and weapons.

The anxiety is stoking unprecedented domestic support for Israel’s military offensive in Gaza, despite international condemnation over soaring Palestinian civilian casualties. In repeated polls, a majority of Israelis have said they want the war to go on as long as it takes to destroy the subterranean threat.

Prime Minister Benjamin Netanyahu laid down a red line at a security cabinet meeting in Tel Aviv on Thursday highlighting the importance of the tunnels. “With or without a ceasefire,” he vowed, Israel would not withdraw its ground forces from Gaza until all tunnels into Israel had been destroyed.

Netanyahu said the tunnels allowed Hamas to “abduct and murder civilians and soldiers”, and he would not agree to any proposal that did not allow the army to demolish all of them.

The Israeli military said it had discovered 32 “offensive tunnels” that begin in Gaza and point east toward Israel. Hamas has used tunnels to carry out at least three attacks against Israeli soldiers during the conflict.

Mushir al-Masri, a Hamas politician and spokesman, said on TV this week that the Israelis had destroyed only a fraction of the tunnels dug by fighters.

“And we will dig many more, God willing,” he said.

In 2006, the group used a tunnel to capture Israeli soldier Gilad Shalit, who was held captive for five years. Military officials say tunnels were also widely used during a three-week war between Israel and Hamas that began at the end of 2008.

The tunnels were constructed over months and years by burrowers who used pneumatic drills. To foil Israeli surveillance, Hamas hid sand and soil in sacks that United Nations organisations used to distribute bulk food.

Hamas fighters have emerged from tunnels during the past 24 days of fighting to ambush and strike Israeli forces. One video released by Hamas this week shows militants crawl from a tunnel before killing five soldiers.

“We have learned a lot over the past few weeks on how to find tunnels,” said a senior Israeli officer, estimating that the military would need just days – not weeks – to destroy all of them.

“Every day, you realise how dangerous and crazy it would be if suddenly Hamas militants would come out of two or three or four tunnels at a time,” said Sarit Ariely, a resident of the southern coastal town of Ashkelon, who said that Israel had no choice but to destroy every tunnel.

“I live only 10 minutes from the tunnels, and only once we demolish them will we feel safe again,” she said.