An explosion rips through the city of Kaohsiung in southern Taiwan early on August 1. Photo: AFP

Gas leaks triggered a series of powerful explosions in the southern Taiwanese city of Kaohsiung, killing at least 22 people and injuring up to 270, officials said Friday, warning that the toll is expected to rise.

The explosions sparked a massive inferno that ripped through the city’s Cianjhen district, sending terrified residents fleeing a huge ball of flames.

“The blasts killed at least 24 people and left 271 others injured,” the National Fire Agency said, adding that the injured were being rushed to various hospitals in the port city.

The explosion is believed to have been caused by a gas leak. Photo: AFP 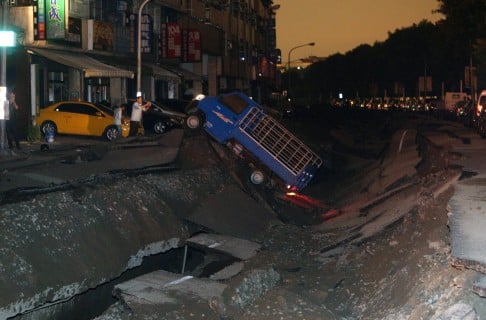 The blasts left craters in the road. Photo: AFP

The explosions, believed to have been triggered by gas leaks, were powerful enough to leave upturn cars and rip open paved roads.

“The explosions were like thunder and the road in front of my shop ripped open. It was like an earthquake,” Taiwan’s Central News Agency quoted an eyewitness as saying.

The exact cause of the gas leaks that triggered the explosions is still unclear.

Residents were seen carrying the injured on makeshift stretchers as ambulances rushed to the scene and firefighters in yellow overalls began removing bodies from the area.

Kaohsiung’s mayor Chen Chu earlier put the death toll at 15 and the fire agency said four firefighters were among those killed. 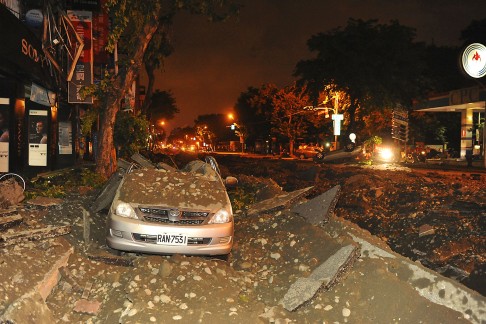 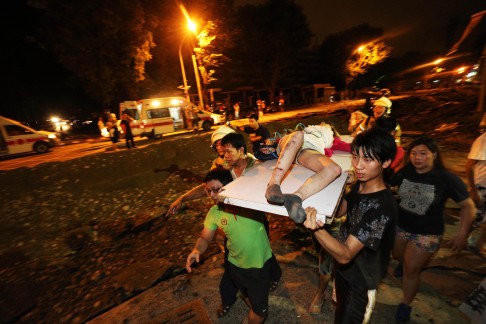 “The local fire department received calls of gas leaks late Thursday and then there were a series of blasts around midnight affecting an area of two to three square kilometres,” the fire agency said in a statement.

One local resident surnamed Peng said: “There was a heavy odour of gas and… then I heard explosions and fire spurting from a store.”

“My house shook as if there were an earthquake and power went out,” she was quoted as saying by the Taiwan Central News Agency.

Local media reported that emergency rooms in Kaohsiung city hospitals were packed with casualties and officials warned that the death toll was expected to rise.

The local government were evacuating residents from the impacted areas and urged schools and offices in the area to provide shelter to those affected as they tried to locate the source of the leaks.

The plane carrying 54 passengers and four crew on a domestic flight plunged into houses in Magong in offshore Penghu islands in stormy weather after a typhoon pounded Taiwan. Two French nationals were among the dead.

In 2012, a man started a fire in a nursing home he lived in southern Tainan city that killed 13 people and injured 60 others.

In 2011, four people were killed and 38 others injured when a truckload of firecrackers exploded in northern Taiwan.

The blast, which destroyed a dozen houses, occurred as the truck driver was unloading the firecrackers near a paper shop in New Taipei City.