‘Our hell beyond hell’: A love letter from the parents of 3 Hong Kong-raised children lost on flight MH17

Evie, Mo and Otis Maslin who died in the flight MH17 disaster over Ukraine. Their grandfather was also killed. Photo: EPA

Three siblings on board the ill-fated Malaysia Airlines jet shot down over the Ukraine grew up in Hong Kong and were much-loved students at the Australian International School.

The three Maslin children – Mo, 12, Evie, 10 and Otis, 8 – had all attended the Kowloon Tong school for several years before returning to Western Australia.

Their parents – Anthony Maslin and Marite Norris – penned an open letter on Thursday, describing the unspeakable grief of losing their three children.

“Our pain is intense and relentless. We live in a hell beyond hell,” the letter reads.

“Our babies are not here with us – we need to live with this act of horror, every day and every moment for the rest of our lives.”

The children’s grandfather, Nick Norris, also died when the Malaysia Airlines flight from Amsterdam to Kuala Lumpur was shot down by a surface-to-air missile last Thursday while flying over eastern Ukraine.

All 298 passengers and crew perished when the Boeing 777 was brought down, apparently by pro-separatist rebels.

Leonie Drew, co-head of the Australian International School, said yesterday: “The school appreciates the Hong Kong community’s support for the family of former students, Mo, Evie and Otis Maslin, however at this stage it would be inappropriate for us to comment until we have come together as a community when school resumes next week.”

It is understood that when the new school terms starts next week, a memorial service will be held in tribute of the three Maslin children.

Friends of the Maslin family in Hong Kong were shocked by the news, with a local junior Australian Football League club to pay tribute to the children at a tournament next month.

Mo and Otis Maslin had played for the junior Cobras team during their time in Hong Kong.

“The Maslin family were very popular and active members of the Cobras before they moved back to Australia and on behalf of the entire Hong Kong Auskick community we would like to extend our sincere condolences for this awful loss,” head coach Brian Jackson wrote on the Hong Kong Auskick website earlier this week.

“We will pay our respects to those we have lost at our next tournament in August but in the meantime please keep the Maslin family and their friends in your thoughts and prayers.”

Last night, Jackson said the family was “very well-liked” and that a tribute in honour of the children will be held early next month.

The Maslin family had been on holiday in Amsterdam and the three children were flying back to Perth with their grandfather to start school on Monday while their parents stayed on for a few more days.

The Australian Consulate in Hong Kong opened a public condolence book earlier this week. Those who want to pay respect to victims of the tragedy are invited to the consulate on the 23rd floor of Harbour Centre in Wan Chai. 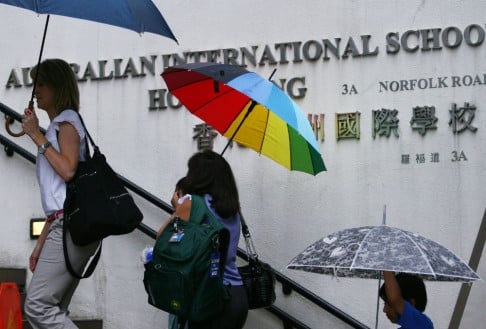 The Maslin children had all attended the Australian International School in Kowloon Tong. Photo: Oliver Tsang

Full text of the open letter written by Anthony Maslin and Marite Norris:

A message to the soldiers in the Ukraine, the politicians, the media, our friends and family.

Our pain is intense and relentless. We live in a hell beyond hell.

Our babies are not here with us – we need to live with this act of horror, every day and every moment for the rest of our lives.

No one deserves what we are going through.

Not even the people who shot our whole family out of the sky.

No hate in the world is as strong as the love we have for our children, for Mo, for Evie, for Otis.

No hate in the world is as strong as the love we have for Grandad Nick.

No hate in the world is as strong as the love we have for each other.

This is a revelation that gives us some comfort.

We would ask everyone to remember this when you are making any decisions that affect us and the other victims of this horror.

So far, every moment since we arrived home, we’ve been surrounded by family and friends. We desperately pray that this continues, because this expression of love is what is keeping us alive.

We want to continue to know about your lives, all the good and all the bad. We no longer have lives that we want to live by ourselves. So we’d like to take the chance to thank everyone, all our incredible friends, family and communities, and to tell you all that we love you very much.

We would also like to thank the people at DFAT; the local co-ordinator Claire and most sincerely, Diana and Adrian from The Hague, without whom we would not be here. We ask the media to respect the privacy of our family and friends – pain is not a story. 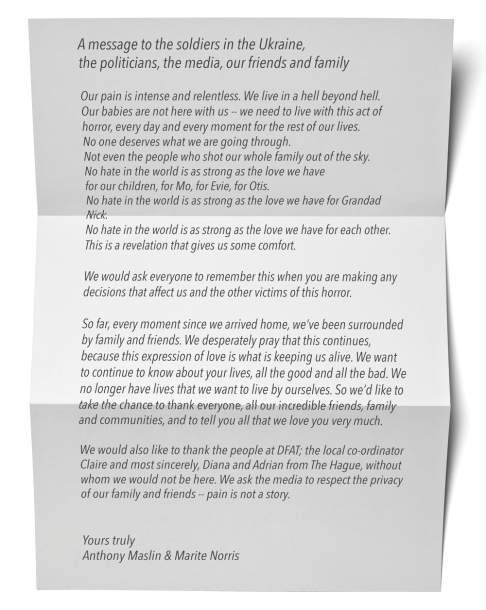 This article appeared in the South China Morning Post print edition as ‘Our pain is relentless. We live in a hell beyond hell’