A jobseeker looks at the recruitment information at a job fair for graduates in China. Photo: Xinhua

A very strange phenomenon appears to be developing in the job markets in Hong Kong and Shanghai.

On the one hand, young jobseekers keep complaining about how difficult it is to find good jobs. On the other hand, employers often say hiring is not easy. What’s wrong?

The arrival of summer means the start of a busy internship season at many companies that will receive university students looking for work experience. For students in their last year of university study, such opportunities are often de facto paid jobs. If they do well, some could be recruited as formal employees once their internship is completed.

Two recent internship cases that grabbed my attention can be considered typical nowadays. Young jobseekers often complain that employers are not patient or kind enough to offer sufficient entry-level opportunities while employers say they have probably been through enough uncertainties and difficulties when hiring.

One intern, in her last year of study at a university in Hong Kong, accepted an offer with a major financial institution but decided not to show up on day one after changing her mind at the last minute and deciding to join another firm that paid slightly more.

She didn’t even bother to write a formal e-mail or letter to tell the financial institution about her decision. Instead, she sent a brief message through the popular social media and real-time messaging application WhatsApp to say “sorry”.

In Shanghai, summer is the time when fresh university graduates busily try to secure their first jobs. In fact, many begin more serious internships at the beginning of the year, which have the potential to develop into a permanent job offer. One graduate performed pretty well during his internship so the company signed him up.

Just a few weeks after being given the job, he surprised everyone by saying he had decided to quit. The reason? He said he did not like his manager and it would be a waste of time for him to work with a colleague he did not like. The human resources manager tried to keep him by telling him the sad but true fact that a job is not always about working happily with colleagues, and in particular with people you like. The young worker’s reply was more or less:  “I understand but I don’t care. We have our own thinking about the way we want to live.”

You may think the problem is an expectation gap between many first-time jobseekers and their employers. That is partly right. But perhaps the more deeply rooted problem is how self-centred and naïve the new generation can be.

After such unhappy experiences with jobseekers, many human resources managers may be rethinking the value of young workers and that might explain why they are complaining about a lack of opportunities.

George Chen is the financial editor and a columnist at the Post. Mr. Shangkong appears every Monday in print and online. 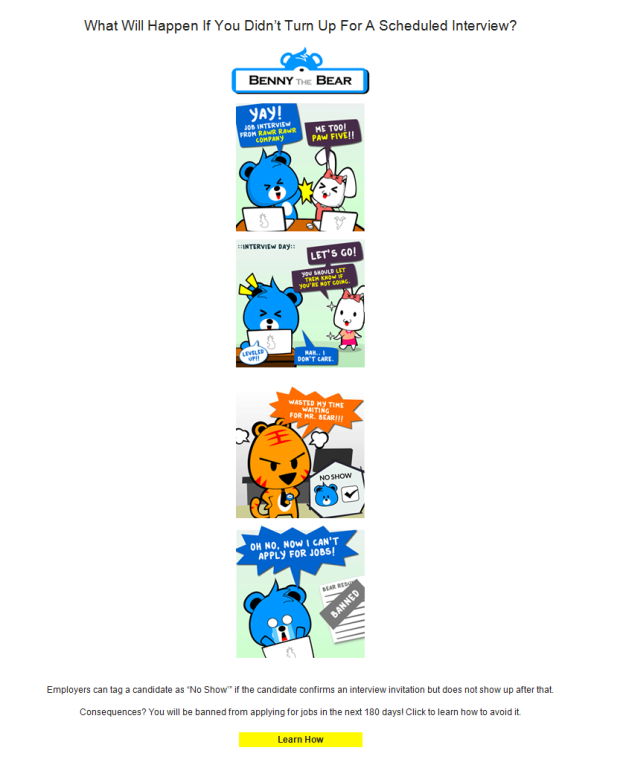 JobStreet has introduced a 180 day ban for ‘no shows’, after many complaints from employers including ChangeU Group.

We felt the 180 day is rather harsh. Jobstreet said that employers can discuss with candidates but the trouble is candidates choose to avoid and not to communicate. Candidates also cannot change profile as their account is linked to an official IC number.

One thought on “How self-centred and naïve jobseekers and interns can be. No show 180 day ban.”