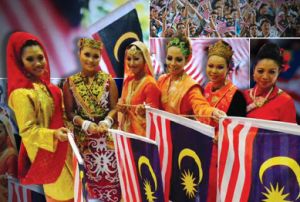 The 100 per cent bumiputera enrollment policy at UiTM makes a mockery of the quota system and the justification of any affirmative action in any country.

He was responding to a call by DAP’s Teluk Intan by-election candidate Dyana Sofya Mohd Daud for equal access to public institutions of higher learning in the country.

The pro-chancellor claimed that UiTM was set up based on Article 153 of the Federal Constitution, adding that bumiputera privileges should not be questioned:

“We have Article 153 in the Constitution that states clearly Malay privileges. If UiTM is opened to everyone, then where is the privilege?”

Deputy Minister in the Prime Minister’s Department Razali Ibrahim also questioned Dyana’s suggestion that a similar institution like UiTM be established to provide quality education for other races.

Nowhere in Malaysia’s constitution will you find any reference to “Malay rights” or “Malay privileges”.

Article 153 mentions “the special position of the Malays”. The main purpose for including Article 153 in the constitution was to rectify the perceived weakness of the Malay community in the economic field, the public service and the problem of Malay poverty at the time of Independence. (Tun Mohamed Suffian Hashim, “An Introduction to the Constitution of Malaysia”, KL 1972:245)

The first clause of Article 153 states:

“It shall be the responsibility of the Yang di-Pertuan Agong to safeguard the special position of the Malays and natives of any of the States of Sabah and Sarawak and the legitimate interests of other communities in accordance with the provisions of this Article.”

The second clause of Article 153 stipulates that the Yang di-Pertuan Agong shall ensure the reservation for Malays and since 1963, for natives of Borneo “of such proportion as he may deem reasonable (my emphasis) of positions in the public service…and of scholarships, exhibitions and other similar educational or training privileges or special facilities given or accorded by the Federal Government and…any permit or licence for the operation of any trade or business is required by federal law…”

“In exercising his functions under this Constitution and federal law…the Yang di-Pertuan Agong shall not deprive any person of any public office held by him or of the continuance of any scholarship, exhibition or other educational or training privileges or special facilities enjoyed by him.”

Is racial discrimination at UiTM reasonable?

As a result of the racial violence of May 13, 1969, the country was presented with a fait accompli by the new ruling class in Umno who were keen to propagate their “bumiputeraist” ideology as a populist ploy.

Again, you will not see any mention of “bumiputera” (the “princes of the soil”) in the Malaysian constitution.

“…where in any university, college and other educational institution providing education after Malaysian Certificate of Education or its equivalent, the number of places offered by the authority responsible for the management of the university, college or such educational institution to candidates for any course or study is less than the number of candidates qualified for such places, it shall be lawful for the Yang di-Pertuan Agong by virtue of this Article to give such directions to the authority as may be required to ensure the reservation of such proportion of such places for Malays and natives of any of the States of Sabah and Sarawak as the yang di-Pertuan Agong may deem reasonable; and the authority shall duly comply with the directions.”

This is the “quota system” we have lived with for more than 40 years and which has created so much controversy for that length of time.

And if we scrutinise this clause more closely, we will see that it is definitely not a carte blanche for the blatant racial discrimination as is the case of enrollment at institutions such as UiTM.

At the 2004 Umno general assembly, you may recall then Higher Education Minister Shafie Salleh declaring:

“I will not compromise on this matter…there will not be a single non-bumiputera allowed to enroll!”

So, if any aggrieved party took the government to court for its enrollment policy at UiTM or any other Mara institutions, how do you think any Federal Court judge would interpret clause 8A of Article 153, ie. “…to give such directions to the authority as may be required to ensure the reservation of such proportion of such places for Malays and natives of any of the States of Sabah and Sarawak as the yang di-Pertuan Agong may deem reasonable?”

The 100 per cent bumiputera enrollment policy at UiTM makes a mockery of the quota system and the justification of any affirmative action in any country!

Compared to the affirmative action policies elsewhere, for example the United States, we find some glaring inconsistencies in this country:

Principle 1: Affirmative action in the US was implemented to rectify the glaring discrimination experienced by historically marginalised groups such as the Afro-American minority in the US.

In contrast, affirmative action in Malaysia is driven by the politically dominant and majority Malay elite and directed at the Malay community as a whole, as the beneficiary group, regardless of wealth and position.

Principle 2: Any preferential treatment for any group should be followed by specific goals, quotas and sunset clauses as is the case in the US.

In contrast, the “Never Ending Policy” of the NEP continues its populist run in Malaysia.

Principle 3: Affirmative action policies in the US are fundamentally not “special rights” of the African Americans, Hispanics and other minorities; policy adjustments to rectify social inequality have a time limitation once the objectives have been reached.

In Malaysia, affirmative action is interpreted as “special rights of the Malays”.

Principle 4: The definition of the target group for affirmative action has to be precise.

The definition of the main target group in Malaysia, namely, “the Malays” is imprecise and allows confusion when any Muslim who is not ethnically Malay can claim to be a beneficiary;

Principle 5: In the US, affirmative action is extended to all discriminated groups including, for example, women, Hispanics and other minority groups.

In Malaysia, only the “bumiputeras” (the “princes of the soil”) are included, while the poorest and most marginalized group, arguably the original people of this land, the Orang Asli, have been excluded from this policy.

Contrasting origins of US and Malaysian affirmative action

The contrasting origin of affirmative action in the US and Malaysia is worth noting.

While in the US, it came about as a result of the civil rights movement in the 1960s by the downtrodden Afro-Americans, Malaysia’s “special position of the Malays” had its origin in colonial policy of divide-and-rule.

The British strategy propped up the Malay feudal elite and divided the people into the “native Malays” versus the “Chinese and Indian immigrants”.

The political machinations by the British colonial power during the post-war constitutional crisis from the Malayan Union (1946) through the Federation of Malaya Agreement (1948) to the Independence Agreement (1957) led to the inclusion of Article 153 in the federal constitution pertaining to “the special position of the Malays.” (See Kua Kia Soong, Patriots & Pretenders: The Malayan Peoples Independence Struggle, 2011 Suaram)

In strong contrast to the US, affirmative action in Malaysia covers not only higher education but also land reservation, quotas in public service,licences, permits, scholarships and grants.

The most glaring inequity is seen when bumiputeras can buy houses costing more than a million ringgit and still claim a discount from the market rate. Can a wealthy Afro-American in the US do the same?

The New Economic Policy of 1971 has led to a carte blanche for the ruling Umnoputeras to control the commanding heights of the Malaysian economy, including banks, plantations, oil & gas, properties and other sectors.

Furthermore, several of these bumiputera-controlled sectors are monopolies. You certainly do not find such a situation with the Afro-Americans in the US!

The NEP’s 30 per cent bumiputera equity share target by 1990 had clearly been reached but there seems to be no end to a policy that allows the Umno elite to continue reaping the benefits of the policy.

Besides being onto a good thing, such a discriminatory policy has populist appeal to win over the Malay vote by portraying non-Malay citizens as “immigrants” who cannot enjoy the equal rights stipulated in Article 8 of the Federal Constitution.

Clearly, affirmative action cannot be justified across the board for communities that are thoroughly class differentiated, such as the Malays, Chinese and Indians in Malaysia.

The Orang Asli are a community that has not undergone class differentiation on a scale similar to the other ethnic communities in Malaysia but they enjoy no such privilege!

Affirmative action based on class or need

In Malaysia, since the passing of the deadline for the NEP in 1990, it is high time for a new socially just affirmative action policy based on need or class or sector.

Thus, if Malays are predominantly in the rural agricultural sector, we should create policies that benefit the poor Malay farmers and not the rich Malay land-owning class.

Only such a race-free policy can convince the people that the government is socially just, fair and democratic and walks the 1Malaysia talk.

The cost and consequences of the racially discriminatory policy in Malaysia have been immense, especially since the NEP in 1971.

It has caused crippling polarization of Malaysian society and costly brain drain.

While the working class Chinese in Malaysia have largely adapted to this discrimination in the public sector by trying to make a living in the private sector, many working class Indians in Malaysia have not been so fortunate and have found themselves marginalized, especially with the destruction of the traditional plantation economy.

The phenomenon of the Hindraf movement which erupted in 2007 is a warning of social problems waiting to explode.

The cost of preferential treatment has also seen greater intra-community inequality, with the higher class members creaming off the benefits and opportunities.

Thus, Malaysians should be able to reclaim their inalienable rights and understand the transient nature of affirmative action.

For a truly “1Malaysia”, let there be no more obfuscation about “rights” of any particular ethnic community but a commitment to unite all Malaysians by eradicating institutional racism through:

To conclude, the solution to the 100 per cent racial discrimination at UiTM is not what Dyana has suggested, namely, have public institutions for the other ethnic groups.

We do not want public institutions that discriminate according to ethnicity (so-called “race”).

We want UiTM and the other “bumiputeras only” institutions to open their gates to all Malaysians so that true national integration can be facilitated.

We want Chinese Malaysian and Indian Malaysian youth to learn a trade with other Malay and indigenous peoples and not become drop-outsof mainstream society.

It is perhaps understandable how our country has regressed to such a level when we have leaders who do not know such basic facts and statistics relating to Malaysia’s socio-economic reality and who do not know the Federal Constitution.